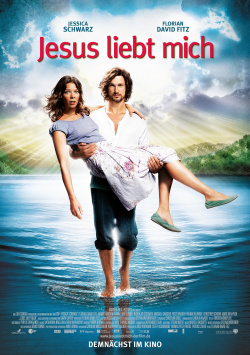 With religion and comedy, it's a thing. How far can you go before someone feels their faith has been violated? How can you be snarky without being disrespectful to a faith? Or must it simply be allowed to laugh about a sensitive topic like religion? After all, so many cruel acts are committed in the name of a (supposed) faith. So it can only be a good thing if religious topics are used to make people laugh. Either way, it's a very difficult grandstanding that has earned numerous filmmakers a lot of ire. The members of Monty Python, for instance, faced harsh criticism from the church for The Life of Brian, and filmmaker Kevin Smith was antagonized by quite a few religious groups before even a second of his film Dogma was seen.

Florian David Fitz takes a much tamer approach than Smith or the Pythons in his directorial debut Jesus Loves Me, but with his sensitive touch manages the feat of getting good laughs without directly poking fun at Christians and other religions. Based on motifs from David Safier's novel of the same name, the film follows Jesus aka Jeshua (Florian David Fitz) as he returns to Earth to prepare people for the coming apocalypse next Tuesday. Gabriel (Henry Hübchen), who gave up his existence as an angel several years ago for the great love, wants to convince him that humans deserve a postponement of the end of all days. In the process, Jeshua also meets Marie (Jessica Schwarz), who has just left her fiancé at the altar and is going through a real life crisis. Marie immediately feels drawn to the strange stranger, as he exudes an aura that she simply can't escape. And for Jeshua, Marie is also a very special person. With her he remembers what it means to love. But is that enough to prevent the apocalypse?

With Jesus Loves Me, Florian David Fitz is convincing both as a leading actor and as a screenwriter and director. His portrayal of Jesus is charismatic, humorous and sensitive in equal measure. His screenplay is full of amusing dialogues and original ideas, combining well-known elements from the Bible with set pieces of romantic comedy to form a surprisingly coherent whole, while also providing some philosophical food for thought. And his direction finally convinces with a coherent timing, a pleasant pace and some nice visual moments. Whether it's the atmospheric locations or the neat special effects, the film just looks really good.

From the very pretty opening sequence in which the story of the apocalypse is told as a puppet show by a group of schoolchildren, to Yeshua's first visit to the small town where Marie lives and the consequences of his encounter with a confused elderly woman, to the moment of impending apocalypse, Jesus Loves Me has numerous very well done ideas to offer. These are transported onto the screen by the good-humoured ensemble with infectious enthusiasm. The nice thing about it is that Fitz always manages to give his characters a little more depth when they are just threatening to degenerate into an absolute cliché. The best example of this is Svetlana, portrayed to great wow effect by Palina Rojinski, who really wouldn't have been much more than a flat cliché without a little twist towards the end. But since this makes it clear that Fitz has deliberately played with this expectation, only to disprove it in the end, it makes the whole thing work extremely well.

Admittedly, not every aspect of the film succeeds equally well, not every gag hits the mark, and many a time you would have liked Fitz to have shown a little more bite. Some moments, such as a big family dinner, also seem a bit overloaded and just barely skirt the edge of hysteria. But overall, Florian David Fitz's directorial debut leaves a very positive impression, which is intensified by the many relaxing laughs the film allows the viewer to have. Buoyed by a likeable Jessica Schwartz, a charming Florian David Fitz, a wonderful Henry Hübchen and a demonically good Nicholas Ofczarek as Satan, Jesus Loves Me is the perfect way to end 2012 and start the new year. If you like German comedies of the slightly more original kind, this film is not to be missed. Absolutely worth seeing!

Cinema trailer for the movie "Jesus loves me (Deutschland 2012)"
Loading the player ...