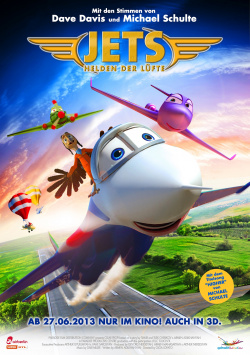 Jets - Heroes of the Skies

Young aviator Maverick (voiced by Constantin von Jascheroff) has to spend all day doing what he sees as nonsensical work instead of doing what he has dreamed of for so long: becoming a professional aerobatic pilot so he can win the big flying competition in which only the best heroes of the skies are allowed to participate. When a mix-up causes him to be mistaken for a member of the youth squadron, he is allowed to participate in the training for the competition. Through the quirky bird Falcon (Dave Davis), Maverick finds his way to a disused airfield where he hopes to be trained by the once-great aviator Vet (Thomas Danneberg). But he wants no part of the flying competition since a tragic accident. Only when he recognizes great potential in Maverick, he agrees to train him. But then the light plane lady Lightning (Annina Braunmiller) shows up and turns Maverick's cockpit upside down. And so it's over with his concentration, which angers Vet enormously. What Maverick doesn't know is that Lightning was sent by the nasty Iceman (David Nathan), who is determined to win the competition and can't use such a talented competitor. But by the time Maverick realizes this, it seems too late for him to become a true hero of the skies.

Before Disney sends its Planes set in the Cars universe skyward in the fall, Jets - Heroes of the Skies is now the Russian vanguard coming to our cinemas. Although the design is clearly based on Pixar's Cars, the animations of this much cheaper production can never keep up with the big US role model. And the story is also much simpler than you're used to seeing in similar animated films from big Hollywood studios. As a result, the film, unlike its role models, is not suitable for the whole family, but primarily for smaller viewers.

But the little ones then also get their money's worth in the charming adventure. The action is kept very child-friendly, if only because of the technical limitations. The characters are very likeable and bird Falcon, voiced by comedian Dave Davis, always provides good laughs with his capers. Iceman is a bad guy who is mean enough that children find him dangerous, but just not scary. And other dangers, such as a flock of ninja birds that add a bit of hubbub at the end of the film, are overall kept amusing, rather than scary.

Adult companions will admittedly be less than enthused by the occasionally less than polished dialogue and very simple-minded humor. Also the story itself does not shine now necessarily before excessive originality. But for children the animation adventure is really very nicely done. The good dubbing, for which, in addition to The Voice of Germany participant Michael Schulte, Johnny Depp's voice actor David Nathan and dubbing legend Thomas Danneberg could be won over, the lovable hero and some really pretty ideas then also console over the fact that Jets - Heroes of the Skies, quite soberly considered, only looks like a not quite so high-quality cousin of the heroes from Disney/Pixar's Cars/Planes universe. And so in the end: for small hobby pilots and animation fans up to 12 years quite worth seeing

Cinema trailer for the movie "Jets - Heroes of the Skies (Russland 2012)"
Loading the player ...