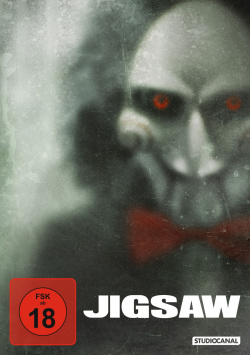 Film: The infamous Jigsaw killer strikes again! But how is that possible? After all, Jigsaw alias John Kramer (Tobin Bell) died ten years ago. So is this a copycat? Or has Jigsaw somehow risen from the dead? While Detective Halloran (Callum Keith Rennie) searches for answers, a group of prisoners desperately fight for their lives. They've all been kidnapped and must now assert themselves against Jigsaw's devilish traps. But one by one they fall victim to and the time Halloran has left to save these people is getting scarcer…

After seven years break the "Saw" franchise returns with the now eighth part. Although the makers of "Jigsaw" have tried not only to offer the fans the familiar, but also to provide the series with new impulses, this film only once again makes clear that the format has simply worn out in the course of the films. Part 1 was a really exciting and surprising thriller, but the following parts only tried to outdo each other in brutality. Part 8 now screws this back quite a bit and again sets stronger accents on the story and its (not quite so) surprising twist.

This is a praiseworthy move of the makers, because as a thriller "Jigsaw" itself would work really well - if only the script would be a little bit better. One of the strengths of "Saw" was the fact that you were excited with the investigators, but also with the prisoners. Here the cop isn't really a sympathetic guy (which isn't unimportant for the course of the story, though) and the people who have to fight against the deadly traps of Jigsaw are drawn so pale that the audience doesn't really care about them. Here in particular, the series would have needed a few new impulses.

Nevertheless: "Jigsaw" is by far not the worst part of the horror franchise. The directors Michael and Peter Spierig ("Predestination") have staged a decent horror thriller, which knows how to entertain with some decent shock effects and a fitting pacing. Surely, at some point even the last one will understand the great twist of the story, even before it is revealed in the movie itself. But even if the effect, which part 1 achieved with its turn, is not nearly reached, the whole thing works quite well in the context of the series.

Therefore, if you like the "Saw" movies primarily because of their brutality, you might be disappointed by "Jigsaw". But if you want to see an exciting and entertaining thriller about the legendary John Kramer and his deadly legacy, you'll get your money's worth. Worth seeing!

Picture + sound: The technical implementation of the film on the DVD is very atmospheric. Even though there are some minor weaknesses to be found in the darker scenes, the color scheme and the harmonious contrast mix capture the dark and dirty mood of the story very well. The targeted sound effects underline this impression. They ensure a pleasant dynamic on the surround channels again and again in an overall quite powerful sound mix. Altogether there is an absolutely deserved one for it: Good!

Extras: The bonus material is really good. The core is the 78-minute documentary about the legacy of Jigsaw, which is not only making of, but also a little retrospective. Absolutely worth seeing for fans! Besides the good documentary, the DVD has a shorter featurette about the props (06:10 min.), as well as a very audio commentary of the producers. The commentary often refers to smaller details, which should be interesting for fans of the series. All in all a very neat bonus package!

Fazit: "Jigsaw" is not the best, but not the worst part of the series. The makers have tried to win a few new pages from the proven formula. This isn't really surprising, but quite entertaining and also a bit exciting. The DVD presents the film in decent picture and sound quality and also offers detailed and worth seeing additional material. For this there is a deserved one: Recommendable!