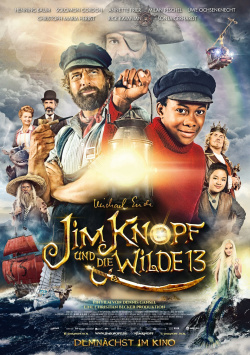 Jim Button and the Wild 13

After Jim Button (Solomon Gordon) and Luke the Engine Driver (Henning Baum) have defeated the dragon Mrs. Grinder, peace returns to Lummerland. But this does not last long. Lummerland urgently needs a lighthouse. For Jim and Lukas it is clear that the illusory giant Mr Tur Tur (Milan Peschel) would be perfect for this. On their journey to his home in the Mirror Desert, the two meet the mermaid Sursulapitschi (Sonja Gerhardt), to whom they offer their help to make the sea shine again. But this launches them into a whole new adventure, where they must not only face the dangerous pirates of the Wild 13 (Rick Kavanian), but may also finally bring to light the truth about Jim's mysterious origins.

With the film adaptation of the classic children's book "Jim Knopf und Lukas der Lokomotivführer", director Dennis Gansel scored a box-office hit in 2018 that managed to eclipse all other German theatrical productions that year, but failed to fully recoup its production costs with just over 2 million moviegoers. Nevertheless, it was clear to Gansel and the production team that they wanted to tell the whole story of Jim Knopf and therefore also bring Michael Ende's second volume to the big screen. While an unexpected heat wave in 2018 kept many potential viewers away from the cinemas, the Corona virus is now standing in the way of a resounding success for Part 2. That nevertheless the decision was made not to postpone the film, must be credited to those responsible. Because with "Jim Knopf and the Wild 13" comes a rousing family adventure in our cinemas, which allows not only young viewers*innen to dive for about two hours in another world.

The second part benefits very much from the fact that the characters are already established and also the story is already running. So the whole thing disposes of a bit more wit and pace, which easily makes up for the fact that the film overall doesn't seem quite as big as its predecessor. Scenery, costumes and visual effects are again on a very high level, which is not necessarily a matter of course, especially for films from Germany. Humor and also the tension level are kept appropriate for children throughout. But only very rarely it becomes really silly, so that you have a lot of fun even as an adult.

With the actors must be highlighted this time especially Rick Kavanian, who manages to give each individual member of the Wild 13 their own personality. It's also nice that he makes this 13-strong role humorous, but not too silly. As a result, the pirate troupe also possesses a certain menace that does a lot for the already positive overall impression of the adventure film. One simply has the feeling here that Gansel and his team in front of and behind the camera have taken not only the book template, but also the target audience seriously.

"Jim Knopf und die Wilde 13" has thus become not only a successful children's book adaptation, but also one of the rare sequels that is at least as good - in some aspects even better - than the first part. For this, there is clearly a more than deserved: absolutely worth seeing - and especially, but just not only for children between 6 and 11 years!

Cinema trailer for the movie "Jim Button and the Wild 13 (Deutschland 2020)"
Loading the player ...