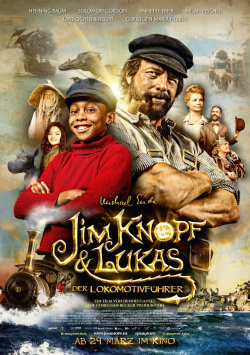 Some life comes into the quiet everyday life on the small island of Lummerland, when the mail ship delivers a wrongly addressed package one day, in which a small orphan boy lies. It is Jim Kopf (Solomon Gordon), who grows up in the next few years with Mrs. Waas (Annette Frier) and travels around the island day after day with locomotive engineer Lukas (Henning Baum) and his locomotive Emma. But the older the boy gets, the closer the day approaches when he will need his own place to stay. And King Alfons the Quarter-By-Twelfth (Uwe Ochsenknecht) is sure that there simply isn't enough room on Lummerland. And so he decides that the island must part with Emma. Of course, Lukas doesn't want to accept this and he decides to leave Lummerland together with Emma. Of course, Jim Knopf wants to go too, and together the three of them embark on a great adventure that will take them from the realm of the Emperor of Mandala across the great desert to the dangerous land of the dragons.

The classic children's book Jim Knopf and Luke the Engine Driver by Michael Ende has not only thrilled generations in book form. The wonderful adaptation by the Augsburger Puppenkiste also still makes children's eyes light up today. Almost everyone can sing along to the catchy title song Eine Insel mit zwei Bergen. Just give it a try and say Ah, now, yes into a group and at least one will immediately answer An island! The story and the Puppenkisten version are firmly entrenched in our recent culture, so of course a new adaptation has a bit of a hard time from the get-go, inevitably being measured against what people have known and loved for decades.

However, director Dennis Gansel has managed very well to live up to the high expectations. His live-action adaptation of the children's book has not only turned out very true to the original, but also looks really good. Finally, a German filmmaker proves once again that we too can make really great cinematic adventures with great effects and breathtaking scenery. Sure, even Gansel can't resist the one or other infantile gag. But all in all, he's more concerned with telling a timelessly beautiful adventure story than just pandering to the current zeitgeist.

Whether it's Lummerland, the lair of the lovable dragon Nepomuk (voiced by Michael Bully Herbig), or the realm of the Emperor of Mandala, it's all full of rich detail, opulent costumes, and a wonderfully playful set. It's just fun to watch - even if the occasional line of dialogue is served up a little flat or a gag doesn't quite hit the spot. There's also a good amount of suspense, but it's served up in a child-friendly enough way that the film can definitely be recommended for younger viewers, ages 5 and up.

Dennis Gansel and his team have shown that the story of Jim Button and Luke the Engine Driver lends itself very well to being told as a great cinematic adventure for the whole family. If this now also goes down well with the audience - and judging by the reactions of the children present at the press screening, this looks very good - then the film version of Jim Knopf and the Wild 13 is also only a matter of time! Absolutely worth seeing!

Cinema trailer for the movie "Jim Knopf and Lukas the Locomotive Driver (Deutschland 2018)"
Loading the player ...