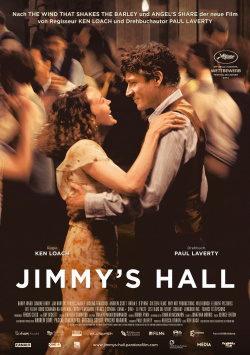 Jimmy Gralton (Barry Ward) spent ten years in exile in the USA. In 1932 he finally returned to his native Ireland. But in his small home village Jimmy is not only welcomed with open arms. For the arch-conservative followers of the church, the man who created a place sinful in their eyes with the dance hall "Pearse-Connolly Hall" is Gralton a troublemaker whose harmful ideas must be nipped in the bud. For many young people, however, Jimmy is a symbol of hope and resistance and his dance hall is a place where oppressed dreams can be lived out. Therefore the young free spirits hope that the dance hall will be reopened after Jimmy's return. But actually the returnee does not want to mess with the church again. But when he notices how much every joy and every artistic freedom is suppressed here, the resistance fighter flares up again in him. Together with a group of old and new allies he rebuilds the "Pearse-Connolly Hall". But it doesn't take long until he feels the rage of his opponents with full force…

"Jimmy`s Hall" is after the rather light comedy "Angel`s Share - Ein Schluck für die Engel" again a typical Ken Loach movie, which in a way can be seen as a continuation of his 2006 drama "The Wind that shakes the Barley". Again he tells a story inspired by true events that take place ten years after the events of "The Wind that shakes the Barley". A sentence from the drama awarded the Golden Palm is particularly reflected when an Anglo-Irish landowner says: "This land will become a hole polluted by priests". The power of the church on an economic and political level then also plays the central role in "Jimmy's Hall", whereby Loach was anxious neither to draw the freedom fighter, nor the priests all too one-dimensional or even caricature-like. Even though the movie can be accused of a certain black-and-white painting in the portrayal of good and evil, he managed to make the character of Father Sheridan, who is excellently played by Jim Norton, look quite nuanced.

All in all, Loach has once again succeeded in creating a very engaging social study, which also tells a very interesting and thrilling story. What distinguishes "Jimmy`s Hall" from earlier works by Loach is that despite all the drama and atmospheric heaviness it also shows a certain lightness, which prevents the viewer from being drawn into a gray mood. Even though this may have been at the expense of depth and ambition, the result is that this drama, unlike most other Loach films, is also accessible to a wider audience.

In addition to its intense visual language and some stirring moments, the film also has some extremely beautiful scenes in which you can simply breathe a sigh of relief and are not only emotionally and intellectually challenged. This, in turn, makes it easier for viewers, who are rather untrained in heavy arthouse cinema fare, to get emotionally involved in the story and get carried away by the events. But even if there is some lightness and you can even laugh heartily in one scene, "Jimmy`s Hall" isn't really easy food at the end. But it's worth it to get involved with the usual bulky Loach style, because the story of Jimmy Gralton and the "Pearse-Connolly Hall" is worth seeing just because it's still full of topicality, but at the same time inspires dreaming and hoping. A rousing arthouse drama not only worth seeing for loyal Ken Loach fans!