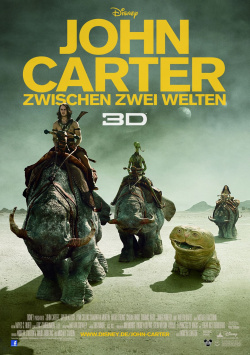 Exactly 100 years ago, in 1912, the character of John Carter, conceived by Tarzan creator Edgar Rice Burroughs (1875 - 1950), saw the literary light of day. In 15 stories, Carter had his adventures on the planet Barsoon, better known as Mars, which were later developed further in comic book form. Although John Carter has had a significant impact on the science fiction genre and is considered a source of inspiration for works such as Flash Gordon and the Star Wars series, all attempts to bring the world of Barsoon to the big screen have failed so far - apart from the arguably trashy Princess of Mars starring former porn queen Traci Lords. But now Finding Nemo director Andrew Stanton has taken on the subject matter, making his live-action debut with John Carter - Between Two Worlds. The result is entertaining, but a groundbreaking sci-fi epic shouldn't be expected.

The story begins on Earth, where soldier John Carter (Taylor Kitsch) wishes to resign his commission in the American Civil War. As this does not please his superior commander so much, Carter now finds himself on the run. When he hides in a cave, he is transported through a mysterious portal to an alien planet. Here on Barsoon, known on Earth as Mars, John becomes embroiled in a warring conflict between the various races that will decide the future of the planet. Working alongside the pugnacious Princess Dejah Thoris (Lynn Collins), Carter goes into battle against the King of Zodanga (Dominic West), who is controlled by the all-powerful Therns, with help also coming from the green Thark Tars Tarkas and the dog-like Calot Woola. But whether defeating the Therns will also allow him to return to Earth is still up in the stars...

John Carter is great entertainment, no question. Popcorn entertainment with high show value, great effects and an imaginative story. But in terms of the influence the literary original has had on the science fiction genre, one would have expected a bit more innovative ideas and more original dramaturgy from the screen adaptation. Because the film seems like a collage of different representatives of the genre, especially of the Star Wars prequels, but also of Stargate or Avatar. Sure, it can now be argued that John Carter came first, because after all, the basic framework of the story now has 100 years on the hump. But precisely because the template now lacks the name recognition of the films and stories inspired by it, the film adaptation could have done with some fresh impetus.

But what feels like a lack of originality isn't the film's real problem. After all, there are always works in every genre that merely regurgitate the old familiar and still work well. No, what significantly detracts from the entertainment value of this sci-fi epic is the fact that the story simply takes itself far too seriously. The film lacks humor, irony, and just plain fun. Sure, the world of Barsoon looks good, the creatures are extremely well animated and especially the lovable Woola provides some good laughs. But overall, the action is dominated by meaningful glances and melancholy, somewhat wooden dialogue. And as a result, the film lacks the very things that make good entertainment a great cinematic experience.

While this may now sound like John Carter is not a good movie, it can be said with a clear conscience that it is not. From the good opening sequence to the finale that just begs for a sequel, there is hardly a moment of boredom. The actors, most notably Taylor Kitsch (The Bang Bang Club, X-Men: Wolverine) do their best to combat the somewhat stilted dialogue. And especially in the action sequences, whether in 2D or (the well-implemented) 3D, the film has an extremely high spectacle value. But it just lacks the igniting spark, which ensures that you get sparkling eyes as a fan of fantasy and science fiction cinema and grin wide with joy.

John Carter - Between Two Worlds has potential to be the good start of a very good franchise. For this, however, the makers would have to go to the next film a little less serious, increase the entertainment value and perhaps let the hero come across a little more self-deprecating. If you don't expect more than a decent sci-fi adventure with some good (but also some disappointing) effects, if you don't expect Barsoon to be even remotely as fascinatingly diverse as Pandora, and if you don't mind the not exactly award-worthy dialogues, you'll surely be able to spend two entertaining hours at the cinema watching John Carter's first adventure on Mars. No milestone, but still absolutely worth seeing!