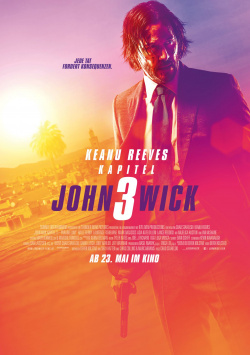 John Wick (Keanu Reeves) has a huge problem: he's been excluded from the hitman community, and there's a $14 million bounty on his head. So it's no wonder that really Every professional killer is hot on his heels. He has only one chance: to fight his way to the High Council and ask to be accepted back into the community. He knows that he will have to pay a high price for it. But how high it will actually be, he does not suspect on his bloody way to the High Council.

Admittedly, the story of John Wick - Chapter 3 is even thinner, than that of the predecessors. In addition, the parallel world of professional killers takes on almost grotesque features. If you already found part 2 too unrealistic, you might tear your hair out in some moments. In addition, it must also be said that some fight scenes, as great and partly original they may be choreographed, are too long and thus also in the long run a little tiring. Even hardcore fans will be put to a real test of patience a few times. But in the end, these quite justified criticisms have little effect - especially if you can get involved in the world of John Wick. Because then this third part is also a great pleasure, with high show values, great action and a good shot of irony can come up.

The predecessor should be seen but necessarily, because Chapter 3 directly follows its events. John Wick has little time to prepare to be shot down. In these first few minutes of the film, before the one-hour lead given to him by Winston (Ian McShane) has even expired, there is a spectacular duel in the New York Public Library. This scene alone is almost enough to make the film completely worth watching. What follows is a wild and very bloody chase through New York, in which director Chad Stahelski displays a creativity sadly lacking in many contemporary action films.

However, after one too long sequence in which Halle Berry takes a central role, the first signs of fatigue become apparent. Now it can no longer be concealed that the story itself just does not give much. A cool look and first-class fight sequences simply can't replace an emotional core. Unfortunately, this is completely missing in this third part. No question: In the first 45 minutes John Wick - Chapter 3 is the best action movie of the last years. After that, however, it is unfortunately revealed that the whole thing degenerates into an orgy of violence, which is great staged, but in contrast to the first part no longer has a dramaturgical core.

Nevertheless, the film is a complete success and part 4 has long been decided. Let's just hope that the makers then also again strive to tell a story in addition to all the fight sequences, which prevents a complete dulling of the audience in the face of the wild Kloppereien - something like Gareth Evans succeeded with The Raid 2. So the bottom line here is: quite a strong start that ends in total fatigue. But for the beginning alone there is clearly a: Worth seeing!