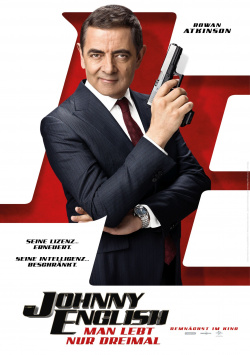 Big excitement at the British secret service MI7: Due to a hacker attack all agents in the field have been exposed. And this just days before the G12 summit, which is to take place in the UK. Now help is needed and the Prime Minister (Emma Thompson) has only one choice: she has to reactivate Johnny English (Rowan Atkinson), who meanwhile works as a teacher. Since a lot has changed since his last assignment, it doesn't take long for Agent English to put his foot in his mouth and leave chaos and destruction in his wake. And yet, in his own inimitable way, he manages to track down the mastermind behind the hack. But can he also put a stop to him before he turns his diabolical plan into reality?

For Rowan Atkinson, the agent parsiflage revolving around Her Majesty's Greatest Jerk is a real labour of love. Although both parts were respectable successes, they were really not the big hit at the international box office. So Johnny English - You Only Live Three Times comes as a bit of a surprise. Especially since Part 2 is one of Atkinson's weakest works. Surprising should also be that the third appearance of the scatterbrained agent offers really good entertainment and can deliver really great laughs.

However, it must also be said that Atkinson and director David Kerr have at times stolen quite unrestrainedly from other masters of the comic trade. Some moments are even almost 1:1 copies of scenes you know from The Naked Gun or movies of Peter Sellers. But even if some gags are copied and in general not every laugh hits the mark, this doesn't change the fact that Johnny English - You Only Live Three Times is a very funny comedy, in which Rowan Atkinson can show his talent for facial expressions and physical comedy. Few other actors can look so delightfully convinced of themselves while chaos unleashed by him erupts around them.

Whether the delightful sequence that shows that English, even as a teacher, could never put aside his real passion, or his attempts to bewitch the beguiling Ophelia (Olga Kurylenko) are among the film's highlights, as are the performances of Emma Thompson, who is simply magnificent as the desperate prime minister. If you liked the first effort from Johnny English, you'll get your money's worth with Part 3. Yes, the film is far from being a classic of its genre. But if you can get a few moments of (almost) laughing tears for your admission money, then it deserves to be worth seeing.

Cinema trailer for the movie "Johnny English - You Only Live Three Times (Großbritannien 2018)"
Loading the player ...