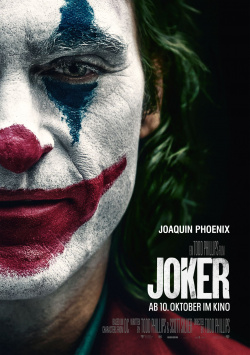 Arthur Fleck (Joaquin Phoenix) lives a life on the fringes of Gotham City society. By day he works as a clown, while by night he dreams of being a successful stand up comedian. And then appearing on the late night show of the great Murray Franklin (Robert De Niro) - that would be the highlight of Arthur's life. But instead, people aren't laughing at his jokes, they're laughing at him. He is constantly ridiculed, beaten and humiliated. His mother (Frances Conroy) still hopes for help from her one-time employer Thomas Wayne (Brett Cullen), but even that hope proves illusory. And eventually, there comes a point when Arthur just gets tired of the joke always being on him.

Director Todd Phillips has become known primarily for comedies like the three Hangover films and the wacky Old School. For a dark, occasionally disturbing film like Joker, he might not seem like the right choice at first glance. But what Phillips has brought to the screen here is truly beyond reproach. Not that there aren't a few valid criticisms. But as a gritty character study and exposing look at our society, this story about one of the DC universe's most famous villains is simply great.

In the run-up to the film, there was a lot of criticism, fearing that a killer - albeit a fictional one - would be glorified and that the depiction of violence would be too excessive. Especially in light of the murders committed by a gunman running amok in a US cinema during a premiere screening of the Batman film The Dark Night Rises, an homage to the Joker seemed wildly inappropriate to many. Indeed, on superficial inspection, one might get the sense that the Joker's actions are justified by portraying Arthur as a man who is repeatedly kicked and tormented by society. But Phillips just doesn't make it that simple.

There are a lot more layers to his Joker than meets the eye at the beginning. Watching Arthur get more and more caught in a downward spiral toward madness is gripping, but also very uncomfortable. Especially since Phillips also addresses issues that have a clear connection to the problems in our society. And that some viewers are bothered by the fact that the mirror is held up to them and that they don't like what they see, is of course not left out. But to criticize the film as glorifying violence is, of course, absolute nonsense.

There are aspects in the film that don't quite work as well or seem a bit forced. To go into those would be to give away too much about the plot, which I will do my best to avoid. But what I can say is this: Any criticism, no matter how valid, is negated by the intense acting of Joaquin Phoenix. What Phoenix delivers here is literally terrifyingly good. His laugh alone, which is explained in the film as some sort of Tourette's syndrome, haunts you long after the film is over. But Robert De Niro is also better in his small supporting role than he has been in a long time.

There will definitely be heated discussions and speculations about the ending for a long time. But one thing is clear: no matter how you interpret the last scene - and thus the preceding events - it doesn't change the fact that Joker has become a truly gripping psychogram. Not an easy film to watch, not one you really want to watch, but still a piece of great cinema! If you think that all comic book adaptations are the same, you'll be proven wrong here with a bitter punch in the pit of your stomach. And for that there is clearly a: Absolutely worth seeing!