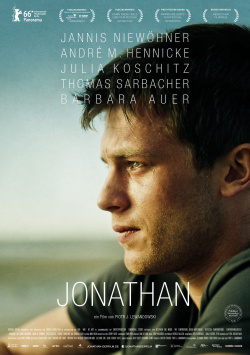 Jonathan (Jannis Niewöhner) is 23 years old and runs the parental farm together with his aunt Martha (Barbara Auer). His mother has been dead for a long time and his father Burghardt (Andr&eacute; M. Hennicke) fell ill with cancer some time ago. He, too, will soon die. But there are still so many things unspoken, especially in relation to Jonathan's mother. That's why Martha hardly speaks to Burghardt anymore. A situation that is getting to Jonathan more and more. When his aunt hires the young, fun-loving Anka (Julia Koschitz) to help him care for his father, Jonathan really blossoms. And for a brief moment, he can forget all his worries. This changes abruptly when an old childhood friend of Burghardt's turns up, and with him a family secret is revealed that threatens to drive a deep wedge between father and son.

Jonathan is a heavy drama about family secrets, forgiveness and also the pressures of social constraints especially in the countryside. It is well to very well acted and especially between the convincing Jannis Niewöhner and Julia Koschitz the chemistry is just right. The visuals are atmospheric and the story has some really interesting aspects. And even though the drama was celebrated at festivals, a visit to the cinema is not really necessary. Because this co-production of WDR, hr, SWR and arte is a TV movie through and through. A good one, to be sure, but not one you absolutely have to see on the big screen.

Be that as it may, even if German film productions in particular hardly make a distinction between cinema and television, there are still moviegoers who don't mind if a film looks more like television than cinema. The main thing is that the story is right. That's definitely the case with Jonathan, even if the ponderousness comes across a bit too forced at times. It's hard to develop real sympathy for the characters, even if you can understand their always grim faces because of their history. Still, a little bit of levity would have definitely done the film and its entertainment value some good.

Whoever appreciates ponderous German dramas, who generally values dreariness over levity, and whoever values good actors or a subject matter worthy of discussion over a film's entertainment value should not miss Jonathan. But if you go to the cinema to just switch off and don't want to be confronted with heavy material here, too, you should rather choose another movie. So the bottom line is: with restrictions definitely worth seeing!

Cinema trailer for the movie "Jonathan (Deutschland 2016)"
Loading the player ...