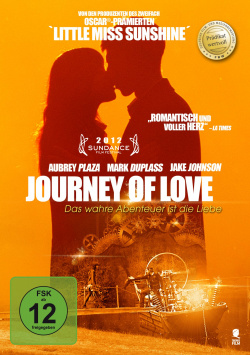 Content: From her job as an intern at a magazine in Seattle Darius (Aubrey Plaza) is so far not really excited. Boring errands and routine jobs determine her workday. But then editor Jeff (Jake Johnson) is looking for volunteer companions for a special story: In the town of Oceanview, someone is looking for a partner via classified ad to accompany him on a time travel. Immediately, Darius signs up, as the whole thing sounds like the perfect way to add some zest to her job. But while she's all about finding the supposed time traveler, Jeff is really about reconnecting with his old high school flame. And so it's up to Darius and her fellow intern Arnau (Karan Soni) to uncover the mystery behind the strange ad. And sure enough, in Kenneth (Mark Duplass), she finds the sender of the time travel quest. When she makes contact with him and spends some time with him, something happens that Darius is not prepared for: she develops feelings for the sensitive man. But the question remains, can Kenneth actually travel through time or is he just crazy? And how will he react when he learns that Darius is actually just after a story?

With Journey of Love, director Colin Trevorrow made such an impression that Steven Spielberg put him in charge of directing the next installment in the Jurassic Park series. Now, given this and the film's time travel theme, if you're expecting Journey of Love to be a fast-paced fantasy adventure, you're sorely mistaken. Rather, it's a small but fine indie comedy, which can convince less with loud laughs than with quiet charm. While at the beginning you might get the impression that the humor is positioned in the raunchy area below the belt, it soon becomes clear that Trevorrow and his screenwriter Derek Connolly have much more to offer than shallow sex jokes. Rather, it very quickly turns into a tender romantic comedy with a light dramatic touch.

It's not just the friendship between Darius and Kenneth, which is based on slowly building trust and could soon become much more, that is lovingly drawn. Also Jeff's efforts to reconnect with his childhood sweetheart and the realization he gains in the process have some very nice moments to offer. Admittedly, there are a few little lengths here and there and towards the end the action runs the risk of getting a little out of hand. But the charming actors like Aubrey Plaza (Parks & Recreation) or Jake Johnson (New Girl) and the very nice ending help to make these little weak points quickly forgotten.

Journey of Love also shows in a very charming way how important it is not to live on the past, always look forward and enjoy the here and now. If you like small, charming American independent films and appreciate comedies that rely more on quiet feel-good humor than on really big laughs, you should definitely not miss this beautiful home movie premiere. Absolutely worth seeing!

Picture + Sound: The very clean picture of the DVD pleases with its warm, very coherent color scheme and a decent image sharpness, which has only in darker scenes a few minor weaknesses. The audio is rather unspectacular, which is not unusual for a small, dialogue-dominated comedy like this. The surround channels are only used very sporadically, but for the most part the tonal action takes place in the front. Since that fits the film and there is at least sporadically some dynamics in the surround area, that is enough under the bottom line fully and completely for a satisfied: Good!

Extras: As a bonus there are, in addition to the trailer and other program tips, a few short interview sequences with the director (approx. 2:41 min.) and a mini-featurette (approx. 2:19 min.), which is not much more than a slightly longer trailer.

Conclusion:Journey of Love is a very charming and original comedy of somewhat softer tones. Coming-of-age drama is skillfully blended here with elements of indie romance and slight mystery touches to create a very special whole. On DVD, this Sundance Festival award-winning time travel comedy presents itself in good picture and sound quality. And even the barely present bonus material can't prevent a clear recommend at the end!