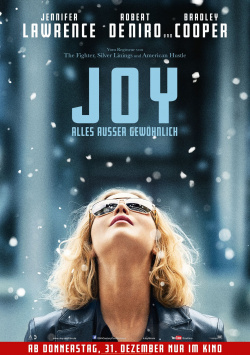 Joy - Anything but Ordinary!

There was a time when Joy (Jennifer Lawrence) was convinced she could make plenty of money from her inventions. But now she's faced with a shambles of broken dreams and has to watch how she makes ends meet for herself and her children. In addition, she has to take care of her mother (Virginia Madsen), who seems to live only for her soap operas, her father (Robert De Niro), who has been put back on the street by his second wife, and her ex-husband (Edgar Ramirez), who still lives in the basement of their house and is firmly convinced that he will make a career as a second Tom Jones. But Joy doesn't let that get her down. She's a fighter for whom fate seems to be giving a second chance. Because of a little mishap during a family outing, Joy makes a new invention that amounts to a minor revolution in the household sector. But it's not enough to just have good ideas - you also have to bring them to the customer.

Joy - Anything but Ordinary! is now the third film that director David O. Russell has directed with the dream team Jennifer Lawrence and Bradley Cooper. After the critical and audience successes Silver Linings and American Hustle, the expectations for a new collaboration of the trio are naturally high, especially since they get here again support from Oscar winner Robert De Niro. De Niro already played a similarly lovable and quirky father figure in Silver Linings, for which he was rewarded with an Oscar nomination. So it's no wonder that Joy - Anything but Ordinary! is now expected to be at least in the same league as its predecessors.

The drama loosely based on the life and career of home shopping icon Joy Mangano can't quite live up to those expectations. David O. Russell's films generally defy clear genre categorization. But while the mixing of different subjects seemed very harmonious especially in Silver Linings and therefore worked perfectly, it doesn't really want to fit together here. Especially at the beginning the production seems to try too hard to find its own tone. It's neither really funny, nor dramaturgically rousing or moving. Many scenes just seem hectic and overloaded. A coherent overall picture doesn't want to emerge at first.

This changes after about the first 30 minutes. Slowly the direction sprays exactly the ease which one is used to from David O. Russell. Now not only the performances of the actors - first of all of a once again excellent Jennifer Lawrence - can really unfold. Also the story pulls the audience more and more into its spell. You root for Joy to succeed in bringing her invention to the market, whether she can stand up to the people who only want to take advantage of her or whether she can use the second chance she fights hard for after a rough setback. By the end, the whole thing is extremely rousing and then has exactly the feel-good effect that made Silver Linings a big crowd-pleaser.

However, despite some very amusing moments and some delightfully light-hearted scenes, Joy - Alles außer gewöhnlich! is primarily a drama about a strong woman trying to hold her own in the tough business world against all odds. And while it's not David O. Russell's best film, it offers enough good reasons to make buying a movie ticket worthwhile. If you liked Silver Linings, can overlook the somewhat bumpy beginning, and just appreciate solid entertainment cinema, this film could be a real treat. And if you're also interested in the history of the wiping mob, you'll really get your money's worth here. Therefore: No masterpiece, but still with small deductions absolutely worth seeing!