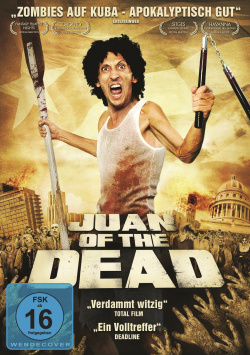 Juan of the Dead - DVD

Film: Juan (Alexis Díaz de Villegas) leads a pretty relaxed life in his native Cuba. With his best friend Lázaro (Jorge Molina) he enjoys the sweet idleness and actually does not plan to change anything about it. But then, just in time for the 50th anniversary of the revolution in Havana, mysterious dissidents turn up, apparently turned into bloodthirsty monsters by a virus. For the government it is clear: it must be a new invasion attempt by the USA. Juan tries to make the best of the situation. He offers relatives of infected people to dispose of their loved ones, who have mutated into zombies, professionally. But soon Juan and his non-infected friends are outnumbered; paddles and machetes seem insufficient as weapons against the zombies. But escape is out of the question for Juan. He will not be driven from his home so easily...

With Juan of the Dead, director Alejandro Brugués has fulfilled a childhood dream. Always, the filmmaker has been a great admirer of cinematic undead. So naturally, a zombie film of his own was an obvious choice. By blending his fondness for the genre with observations he made in his native Cuba, he's managed to create a very special zombie comedy. As a starting idea, Brugués asked himself what it would be like if the confrontation with the United States that Cuba has been preparing for for several decades now were to become a confrontation with zombies? Can the people of Cuba, who Brugués says have increasingly looked like zombies in recent years, be so easily distinguished from the real undead? And can socio-political satire, bloody slapstick and solid horror action be combined into a coherent whole?

The answer is clearly yes! Juan of the Dead isn't quite in the same league as zombie comedies like Shaun of the Dead, to be sure. But the rather unusual setting for this genre and some very original ideas make this flick a very entertaining treat. Admittedly, the transport of political criticism through zombie movies is a common stylistic device at least since the classic Night of the living Dead, which is again not exactly subtly used here. So here you can't really speak of great originality. It is rather the mixture of the satirical elements with the rather straight comedic parts and the despite low budget quite respectably implemented zombie fights, which drive the entertainment value of the film up.

Additionally, the director's obvious love not only for the zombie subject, but for film per se, lends a certain charm to the bloody goings-on that makes you, as an inclined genre fan, willingly overlook some of the weaker moments and shallower gags. Juan of the Dead may not have the cult potential of its great idols. However, a little breath of fresh air comes from Havana into the genre, which is currently enjoying great popularity again by representatives such as the series The Walking Dead. So if you like it undead, funny and a little whimsical, you should definitely go with Juan and his friends on a zombie hunt. Worth seeing!

Picture + Sound: Juan of the Dead was made on a fairly low budget, but that's only a minor complaint about the film in terms of its technical realization for DVD. Although image and sound can not keep up with major Hollywood productions, but in terms of image sharpness, color or even implementation of the surround effects, the amusing horror film can be seen and heard. Really disturbing weak points can not be made out here. Good!

Extras: The additional material of the DVD consists of two interview (6 + 12 min.), three Behind the Scenes featurettes about the rehearsals (about 3 min.), the make-up & the effects (about 2 min.), as well as about the actual shooting (about 5 min.), as well as the trailer and other programming tips from the provider.

Conclusion: Juan of the Dead is an entertaining zombie comedy with socio-political undertones that has a few minor hangs, but the maker's obvious love for the genre easily makes up for them. The technical realization of the DVD is on a good level, the bonus material is not particularly extensive, but informative. Zombie fans who like it sometimes a little more weird and unconventional, should definitely access here!