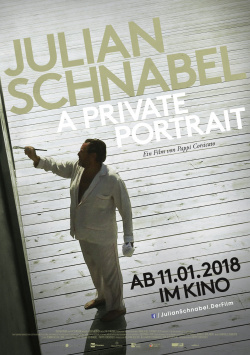 He is considered one of the best and most important artists in the US, an eccentric and provocative personality, and a great filmmaker. Julian Schnabel is without question a dazzling figure on the art scene, as he continually defies boundaries and pigeonholing. Even as a child, he had the desire to become a great artist - even before it was actually clear to him what an artist actually does. Schnabel has now granted filmmaker Pappi Corsicato an intimate insight into his life and work. He answered his questions and provided him with many private photos and film footage. And family, friends and companions could also be interviewed for this documentary.

The result is Julian Schnabel - A Private Portrait - a film whose title really says it all here. Corsicato has created a truly intimate portrait of an exciting artist and interesting person. The viewer learns, for example, from the artist's sister that he always knew exactly what he wanted and that he never bent himself for others. We see him full of passion in his creative work, look over his shoulder when he shoots his films such as the magnificent Butterfly and Diving Bell, or experience him as a family man with his children at the seaside.

The problem with documentaries made in such close collaboration with the documented protagonist is usually that they tend to be one-sided and not very critical. And that is the case here as well. Schnabel does engage in some self-criticism and it is also addressed that he has the problem of occasionally saying things that can hurt others. But other than that, his nature and work are really only praised. But even if it might have been quite exciting here and there if Pappi Corsicato hadn't been quite so close to the subject in his way of looking at things, the cinematic portrait of the artist is overall very interesting and stirringly directed.

There are some very moving moments especially in the moments of absolute honesty, but also those that allow for a very exciting perspective on the artwork of Julian Schnabel. But you don't necessarily have to know Schnabel's work to be swept away by this documentary. Because it is simply a gripping portrait of a very exciting person. And for that, it definitely gets a: Absolutely worth seeing!