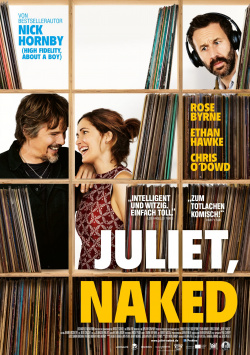 Annie (Rose Byrne) is frustrated: her boyfriend Duncan (Chris O`Dowd) barely pays her any attention anymore. The days of animated conversation and unbridled passion are long gone. Now Duncan devotes himself only to his true love: American rock musician Tucker Crowe (Ethan Hawke), who has disappeared without a trace since his last gig in 1993. Duncan shares his love for the musician on a fan page, on which he also praises the demo tapes of the album Juliet in the highest terms. The annoyed Annie, on the other hand, posts her very own critique of the demo recordings, which in its relentless honesty attracts the attention of none other than Tucker Crowe himself. An email friendship develops between Tucker and Annie, unleashing feelings in her that she had long forgotten. Then one day she receives the news that could turn her life completely upside down: Tucker is coming to England and wants to meet Annie.

Juliet, Naked is based on the novel of the same name by Nick Hornby, who has already amusingly shown how destructive a fan's obsessive passion can be to a relationship in Fever Pitch. Director Jesse Perez has adapted the story very charmingly. With good actors, a lot of wordplay (which, however, is largely lost in the German dubbing) and some very nice moments, the comedy does not provide quite big laughs, but for consistently good humor. It may be that real depth is missing here and that some scenes seem a little bit overdone. But if you leave the cinema at the end with a smile on your face, then such small weaknesses are quickly forgotten.

The film can benefit a lot from the good chemistry between Rose Byrne and Ethan Hawke. Hawke is a big fan of Nick Hornby himself and would have loved to be in About a Boy already. Now he's gotten the chance to star in a Hornby adaptation after all. And he does it with a lot of humor and charm, so that the audience can understand why Annie falls in love with him. Chris O`Dowd has a rather thankless role, but he masters it wonderfully. He manages to make Duncan somehow sympathetic despite his flaws and less than nice behavior.

Juliet, Naked is certainly not a masterpiece, but a film to which the predicate nice applies perfectly. That may always sound a bit negative, but it is meant extremely positively here. The film offers nice entertainment, entertaining reality escape from the gray everyday life and a love story that does without excessive kitsch in a very pleasant way. And for the pleasant good mood feeling that remains at the end, there is completely deserved: Absolutely worth seeing!