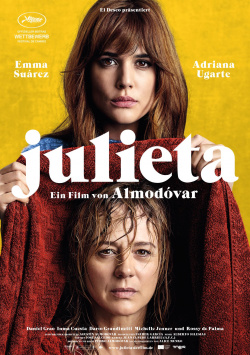 For many years now, Julieta (Emma Su&aacute;rez) has had no contact with her daughter Antia. She has no idea where she is, if she is happy, or if she is even alive. Day after day, Julieta lives with the pain of uncertainty. But she has come to terms with it and has decided to start a new life with her boyfriend Lorenzo (Dario Grandinetti) in Portugal. But just before the move, she runs into Bea (Michelle Jenner), once her daughter's best friend, and learns that she had recently met Antia. Julieta has new hope that she might be able to find her daughter again. Without further ado, she breaks up with Lorenzo, moves back into her old house and begins to write down her memories. A painful journey into her past begins - in hope of a better future.

With the drama Julieta, director Pedro Almod&oacute;var delivers what is now his twentieth feature film. The film basically tells two stories, which in the end form a whole picture - even if the end is actually left open. On the one hand, it tells the desperate search of a mother for her daughter. Almod&oacute;var shows what ignorance and desperation can do to a person over the years. Emma Su&aacute;rez convincingly plays the older Julieta, who believes she is ready for her daughter to let go, only to realize by chance that is not the case at all. She realizes, however, that she must face her past in order to understand her daughter. For only then would she have a chance of establishing the basis for a future together should they meet again.

On the other hand, what is at its core a very sad love story is told by young Julieta (Adriana Ugarte), who falls in love with a man whose wife has been in a coma for some time and eventually dies. For Julieta and Xoan (Daniel Grao) begins a time full of passion, happiness and tenderness. The birth of their daughter Antia is the climax of a great love story, over which dark shadows are soon cast. More should not be revealed at this point, of course. Only this much: With a good sense for the development of his characters he draws a gripping drama about family, loss, love and death. And as is not unusual with Almod&oacute;var, the whole thing is carried by very strong female characters.

However, it must also be said that Julieta does not belong to the strongest films of the master. Because besides some really effective and also intense moments, the drama also has some very tough moments to offer as well as scenes that don't necessarily add anything to the story. But despite some weaknesses and lengths, the film offers enough strengths to make up for it - first and foremost the elegant visual language and the two very good leading actresses. If you appreciate Almod&oacute;vars quieter works, you should definitely not miss Julieta either. Worth seeing

Cinema trailer for the movie "Julieta (Spanien 2016)"
Loading the player ...