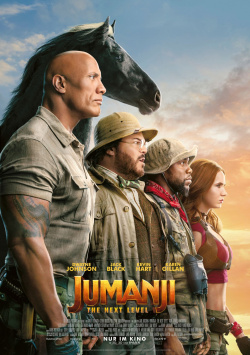 Jumanji - The Next Level

It's been a few months since nerd Spencer, jock Fridge, self-absorbed Bethany, and unassuming Martha were drawn into the video game Jumanji. Since then, their lives have changed drastically. Only Spencer feels weak and insignificant compared to his avatar, Dr. Smolder Bravestone (Dwayne Johnson). And so he secretly sets out to fix the game that was actually destroyed - with fatal consequences. When the others discover Spencer is back in Jumanji, they decide to help him. But things go wrong in the process, and while Martha once again finds herself in the avatar of fighter Ruby Roundhouse (Karen Gillan), this time Fridge wakes up in the body of overweight researcher Dr. Shelly Oberon (Jack Black). But that's not the real surprise, because inside the avatars of Dr. Bravestone and of Mouse Finbar (Kevin Hart) are Spencer's grandfather Eddie (Danny DeVito) and his former business partner Milo (Danny Glover) .

Jumanji: Welcome to the Jungle, the quasi-reboot/remake/sequel to the 1995 fantasy adventure Jumanji starring Robin Williams, was a genuine surprise hit two years ago. Not only did the action-packed adventure comedy gross nearly $1 billion worldwide. The film was also well received by critics and audiences alike. This wasn't just due to the prominent cast, which included action megastar Dwayne Johnson and Kevin Hart and Jack Black, who are known for their comedic roles. Rather, it was numerous original script ideas, the self-deprecating play of the actors and the successful mix of action and humor, which made this film a box office hit.

Clearly, there had to be a sequel. Although the predecessor actually offered a good and well-rounded conclusion, a way was found to tell the story further after all and take it to the next level. Since the makers around director Jake Kasdan were aware that they would lack the surprise effect this time, they simply mixed up the basic constellation a little and expanded the troupe with the two oddball pensioners Eddie and Milo. And that was a good decision. Because in principle Jumanji - The Next Level offers little new. The film is a typical sequel that simply varies what has worked well before.

However, it is the small changes and additions that make it work really well a second time. The film offers great laughs non-stop, has plenty of charm and also delivers great effects and breathtaking action. In short: This new trip into the world of Jumanji is just a lot of fun. It is simply delightful to watch how much fun the actors take their own image on the chin and are not too shy for slapstick interludes.

Yes, really new ground is not entered here truly. If you were hoping for that, you will definitely be disappointed by this sequel. But if you can't get enough of the good chemistry between the actors, the humour and the imaginative world of Jumanji, you'll do everything right again by buying a cinema ticket. Absolutely worth seeing!