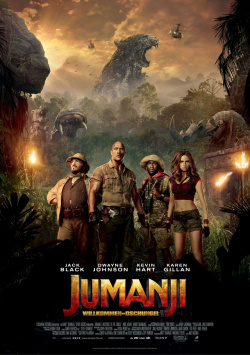 Jumanji: Welcome to the Jungle

Detention is annoying as it is, but cleaning up a room full of old stuff is a real pain for nerd Spencer, jock Fridge, self-absorbed Bethany and unassuming Martha. That's when the find of an old video game comes in handy. But instead of an enjoyable pastime, the game turns out to be pure horror when the four teens get sucked into the game and suddenly find themselves in the bodies of their avatars. Spencer is a muscle-bound jungle hero (Dwayne Johnson), while Fridge (Kevin Hart) has lost half his height and Martha (Karen Gillian) has mutated into a fighting Amazon. Bethany has been hit particularly hard, turning into an overweight explorer (Jack Black). To get back out of the game, the four must return a fabled stone to its ancestral place, which the nasty Van Pelt (Bobby Cannavale) and his henchmen are determined to prevent them from doing at any cost. If they don't succeed, they'll be trapped in Jumanji forever.

22 years it's taken for the hit movie Jumanji to get its sequel. It's a good thing that despite the long time, the makers led by director Jake Kasdan decided not to remake it, but rather to reboot it in the form of a sequel. The new film more or less picks up directly from the end of the first film, only to completely turn around and modernize the story of the first. As a result, Jumanji: Welcome to the Jungle just doesn't feel like a rehash, but a reboot that does, however, invoke the original in some moments.

The result is an adventure comedy with high entertainment value that younger viewers can enjoy just as much as adults. Certainly, logic and depth take a holiday here, nor should they be sought too doggedly. That clouds the pleasure of this jungle adventure noticeably. But if you're up for it, you'll be able to laugh heartily more than once, while the two-hour running time almost flies by. Jake Kasdan's production is fast-paced and does almost completely without unnecessary dramaturgical ballast. For such an action comedy this is exactly the right approach.

But primarily the film lives from the amusing play of the actors. They have to play teenagers who suddenly find themselves in completely different bodies. This is especially funny with muscleman Dwayne Johnson, who is still the scrawny, scared nerd on the inside though, and with Jack Black, who is actually a "I need to post myself on Instagram every 5 minutes" blonde. But Kevin "I'm missing half of me" Hart and Karen Gillan also play the especially initially bumpy handling of unfamiliar bodies extremely hilariously. When vamp-turned-wallflower Martha learns from Bethany aka Jack Black how to turn men's heads, Gillan makes sure there's not a dry eye in the house.

Jumanji: Welcome to the Jungle is a real positive surprise. Actually, no one was really waiting for a Jumanji sequel and the first trailer didn't really look like great entertainment either. But that's exactly what the movie delivers. It's not particularly sophisticated, but it's not too raunchy or flat either. It's an entertaining adventure that the whole family can enjoy. Without big moments of embarrassment, as you find them nowadays unfortunately far too often in comedies, but with extremely good-humored actors and wonderfully exaggerated action. For this, the bottom line is clearly a: Absolutely worth seeing!

Cinema trailer for the movie "Jumanji: Welcome to the Jungle (USA 2017)"
Loading the player ...