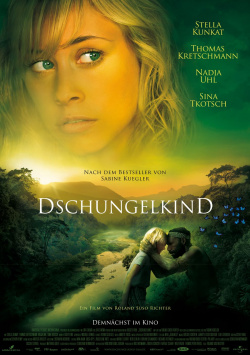 In the bestseller "Dschungelkind" Sabine Kuegler has processed her experiences of growing up as a child in the jungle of West Papua. Director Roland Suso Richter has now taken on the difficult task of adapting the extensive material into a two-hour feature film. The result can convince in many respects, but also reveals some weaknesses, whose origins can be found partly already in the original.

When Sabine (Stella Kunkat) is just eight years old, she has to emigrate with her parents Doris (Nadja Uhl) and Klaus (Thomas Kretschmann) and her two siblings to West Papua. Klaus is there as a linguist researching the language of a completely reclusive native tribe, which will take several years. While the family takes much of their traditions and memorabilia with them to this foreign land, living far from known civilization always proves to be a great challenge. They must learn to understand and accept the rules and way of life of the tribe, while not imposing their own ideas of morality and law on their hosts, as difficult as that may be for them in some situations. Over time, the family and especially Sabine becomes a part of this civilization and when she returns to Germany as a sixteen-year-old (Sina Tkotsch), she must realize that now the former home has become a stranger for her as a "jungle child"...

Roland Suso Richter ("Dresden", "Das Wunder von Berlin") has translated Sabine Kuegler's memories into beautiful images that suggest a certain jungle romanticism that could possibly be interpreted as a little naive. Although the cultural contrasts are already very well worked out, in the end the feeling remains that a somewhat more critical look - also at the book - would have done the production good. Because, and this is the real problem of the movie, the view on life in the jungle and our society seems a bit one-sided and above all arrogant. Because all scenes that take place beyond the "new"home of Sabine and her family are kept in appealing grey, the people are ignorant and unfriendly and what calls itself civilization is in reality filled with less humanity than life among "wild". Of course there may be some truth in this and of course the main character of the film sees it that way. But to stage that in such a heavy-handed, unimaginative way makes Sabine come off as an arrogant and less than likeable brat, whose story is also made far less interesting as a result.

Even though the images captured by cinematographer Holly Fink can come into their own on the big screen, the film as a whole feels more like a good TV production. The fact that Richter has mainly worked for television in recent years is especially noticeable in the dramaturgical realization of the material. The actors all act rather "klein", which is not meant in a reserved way, but rather concerning the actual potential of actors like Nadja Uhl and Thomas Kretschmann. There is simply too rarely an engaging atmosphere to entertain the viewer for over two hours. A few beautiful pictures are simply not enough. Surely, those who loved Sabine Kuegler's books will also have the necessary interest for this film. But the interesting story could have been told in a more exciting and differentiated way. Because one becomes correctly warm with this "Dschungelkind" only with difficulty.