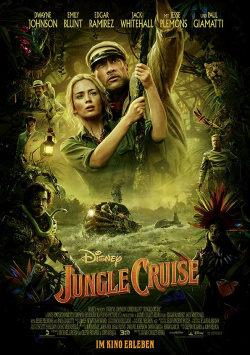 Somewhere in the depths of the Amazon, according to an ancient legend, there is a tree whose flowers can cure any disease. No man has succeeded in finding the tree. But now intrepid researcher Lily Houghton (Emily Blunt) wants to change that. After stealing a valuable artifact in London that is supposed to point the way to the mysterious tree, she and her brother MacGregor (Jack Whitehall) travel into the jungle, always pursued by the nasty Prince Joachim (Jesse Plemons), who wants to use the tree's magic to become the most powerful man in the world. With the help of adventurous Captain Frank (Dwayne Johnson), Lily aims to find the tree before the nasty German does - unaware that a centuries-old curse must first be broken in order to find the way. And that's far from the only danger that awaits them on the Amazon river journey...

With "Jungle Cruise", Disney delivers another film based on a Disney park attraction. Whether it will become as successful a franchise as "Caribbean Pirates" was, may be doubted. For that, the story and its realization simply lack greatness. That's not to say the film isn't entertaining. Jaume Collet-Serra has created a classic adventure film with some fantasy elements that works especially because of the good chemistry between Emily Blunt and Swayne Johnson, but otherwise fails to leave much of a lasting impression. So the whole thing really resembles a ride in a theme park attraction: it's fun and exciting, but when it's over you rush straight to the next ride.

The problem is that "Jungle Cruise" tries a little too hard to become the new "Curse of the Caribbean" rather than focusing on its own strengths. For example, the part about the curse associated with the magic tree in particular could well have come from a part of the Pirates saga - not only dramaturgically, but especially visually. Another point of criticism is that the main villain, Prince Joachim, is portrayed by Jesse Plemons almost like a caricature. As a result, he never poses a real threat, which was a bit different with Jack Sparrow's antagonists.

If the film is simply a colorful adventure in which the two main characters engage in shrewd verbal exchanges, then the whole thing is really fun. While that's not enough to carry the film through its entire running time, it definitely helps to cover up some of the weaknesses. After all, boredom never sets in during the impressive 127 minutes. The action is too fast-paced, the set design too detailed and the relationship between Lily and Frank too coherent for the story to meander. Even if "Jungle Cruise" didn't become the big spectacle the film obviously wants to be, it's still a classic entertainment film in the best sense of the word that works really well on the big screen. For that, especially for fans of films like "The Mummy" or "In the Hunt for the Green Diamond", it gets an absolutely deserved: worth seeing!