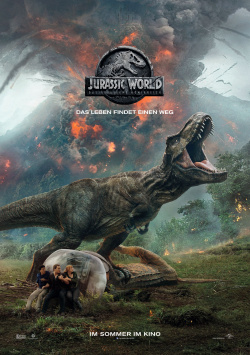 Actually, the Jurassic World theme park was supposed to become the biggest tourist attraction in the world. But the dream was shattered after a genetically generated dinosaur erupted three years ago. The park was destroyed and the people left Isla Nubar. Now the dinosaurs live here as sole rulers of the island. But then the volcano on the island threatens to erupt and destroy all life. Billionaire Benjamin Lockwood (James Cromwell), once partner of Jurrasic Park founder Hammond, wants to save his legacy. Therefore, he hires the former park manager Claire (Bryce Dallas Howard) to return to the island together with Owen (Chris Pratt) to save the still living dinosaurs - including the Raptor Blue, which is imprinted on Owen. But the pair quickly discover that their rescue mission serves an entirely different purpose, and that the dinosaurs might be better off going down with Isla Nubar after all.

After Jurassic World grossed over $1.6 billion worldwide three years ago, making it still currently one of the top five highest-grossing films of all time, Spanish director J. A. Bayona (The Orphanage, Seven Minutes Past Midnight) was faced with the difficult task of topping - or at least living up to - that success and the expectations that came with it. In some aspects he succeeded very well, in others unfortunately not at all. First, the story: to begin with, Jurassic World: The Fallen Kingdom is strictly a remake of Forgotten World: Jurassic Park. Here, as there, the heroes from the prequel must return to help the now free-roaming dinosaurs, only to learn that they're about to be taken off the island by nasty humans. There's a setting that even seems to have been adopted one-to-one. Whether intended homage or coincidence isn't clear. But it is clear that there is a certain recognition value for connoisseurs of the franchise - even if Bayona can come up with some really great and spectacular effects here.

In the second half then comes a little surprise: Even if the story - and especially an element to which I will return later - is badly hanebüchen, you have to credit at least the recognizable will to offer something different, the team around J.A. Bayona. Instead of a big spectacle, the focus is on real suspense, which has almost an intimate character due to the limited space and the reduction to only one dino for long stretches. It's very effective, and has some surprisingly funny moments to offer, as well as some genuinely rousing ones.

In the final minutes, the groundwork is then laid for a third Jurassic World, with the cards shuffled all over again. That in itself is interesting, but the way it gets there is really dumb. Which brings us to the film's biggest problem: why on earth do kids have to play a central role in every Jurassic movie? It worked in the first one, and it made a certain amount of sense. The character of Lockwood's granddaughter, on the other hand, feels cramped into the story. Especially when her secret is revealed, which in turn leads to the events that lay the groundwork for the next part, more than a few viewers will clap their foreheads in exasperation. What that girl just said isn't their serious now, is it?

Well, apparently no one in Hollywood really reads scripts anymore. Other criticisms would be the fact that the highly touted return of Ian Malcolm (Jeff Goldblum) doesn't last much longer than it does in the trailer (which unfortunately also applies to my absolute favorite scene from the trailer) and that the music lacks any discernible theme, making it sound absolutely interchangeable. It's not until the end credits that John Williams' classic Jurrasic Park Theme is heard, bringing back musical memories of better times. Too bad, actually. When the theme sounded in the cinema for the first time in 1993, I was so enthusiastic about the music and the movie that my apartment was adorned with posters, movie books or even a roaring raptor figure. Yes, I have always been a nerd! As an outed fan of the franchise, I can say that despite the sometimes quite annoying criticisms, I really had a lot of fun with Jurassic World: The Fallen Kingdom and that some scenes are a real feast for the eyes for dino fans. Dramaturgically a bit better than the predecessor, but unfortunately there are again some clear weaknesses especially in this area. Nevertheless, for fans: Very close to be the second best part of the series and therefore also Absolutely worth seeing!