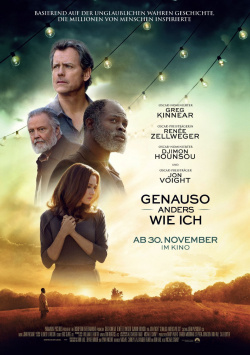 Just as different as me

Successful art dealer Ron (Greg Kinnear) and his wife Debbie (Ren&eacute;e Zellweger) have long lived side by side rather than together. When Debbie finds out Ron has been cheating on her, she gives him an ultimatum: either he tries everything for a fresh start, or the marriage is over. For Ron, there's no question about it; he wants to try for a fresh start. Still, he's surprised that the required commitment includes helping out at a soup kitchen for the homeless. This is where Debbie has been volunteering for some time, and she wants Ron to learn, too, how important and fulfilling it can be to give some time to socially disadvantaged people. It is here that the pair meet the withdrawn and seemingly violent Denver (Djimon Hounsou). At first, Ron is afraid of the man, who smashes a car window and goes on a rampage in the lunchroom. But as he gets to know Denver better, he recognizes beneath the rough exterior a kind-hearted, loving person - a man who will make a lasting difference in his life and that of his family.

Just as Different as Me is based on the true story of Ron Hall and Denver Moore, whose book together has touched millions of readers worldwide. From the best-selling book, Michael Carney has crafted a beautiful but somewhat plodding and arguably cheesy drama. You can tell the film is Carney's first directorial effort, burying many of the story's emotions under an unnecessarily convoluted narrative structure and overly drawn-out moments. The actual story is framed by a plot that observes Ron trying to write down his history in a friend's secluded country home. Since characters are introduced here that have no relevance to the actual plot, and since this part of Ron's story is also irrelevant to the experiences that precede it, this adds about 15 minutes of unnecessary baggage that drags the entertainment value of the film down significantly.

When the film focuses on the essentials, it works very well, even if slightly more subtle attempts to stimulate the audience's tear ducts would have been preferable. What ultimately saves the film is partly the fine cast, but also the fact that the true story is so moving and inspiring that even an overly kitschy retelling is still quite involving. There are some particularly strong moments where it pays off that Greg Kinnear and Djimon Hounsou can get a whole lot out of even a weak script. Ren&eacute;e Zellweger has to try a little harder, which may be because her face (that damn Botox!) still takes a lot of getting used to and lacks that naturalness that once made her so likable.

Just as different as I am, this is not the film it could have been. Michael Carney simply lacks the sensitive touch and technical skill for that. But for a feature debut, the result is quite solid with some really good moments that outweigh many - but not all - of the weaknesses. A film that is carried by the story and the actors and therefore, despite some shortcomings, absolutely deserves a worth seeing

Cinema trailer for the movie "Just as different as me (USA 2017)"
Loading the player ...