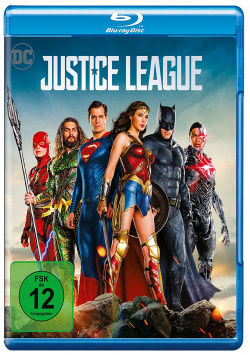 Film: Superman (Henry Cavill) is dead and the chaos now seems to rule Metropolis and the rest of the world. Bruce Wayne (Ben Affleck) tries his best as a Batman to ensure law and order. But when Steppenwolf, a mighty opponent from ancient times, returns and once more it is about nothing less than saving the earth and the whole of humanity, he realizes that he needs help. Together with Diana Prince alias Wonder Woman (Gal Gadot) they want to recruit other people with superpowers to stop Steppenwolf and his army. But although they manage to put together a powerful team with Aquaman (Jason Momoa), The Flash (Ezra Miller) and Cyborg (Ray Fisher), the incredible power of Steppenwolf makes it clear: The Justice League lacks an important member - Superman!

However, after "Wonder Woman" was largely received positively, this also had an effect on expectations towards "Justice League". And indeed: Even though the story is so thin that it could fit on a stamp and the villian in charge disappoints once again - both dramaturgically and optically - the entertainment value of this superhero movie is still very high. There are several reasons for this: On the one hand, it's clearly noticeable that Joss Whedon, who already successfully brought the "Avengers" together, is responsible for a reworking of the script and numerous re-recorded scenes. The reason for this, however, is tragic, as Snyder had to leave the production prematurely due to a terrible incident in his family.

On the other hand the studio obviously took the criticism of the fans to heart and insisted that the sound was a little lighter this time. And of course Whedon's sometimes wonderfully self-ironic tone was just right. Surely, especially with Barry Allen alias The Flash you get the feeling that he is only there to make some good laughs. He is so obviously conceived as a darling of the audience that this can certainly be described as manipulative. But it just works. This Flash is funny, at the same time also sympathetic and in its nerdige kind really cool.

The other members of the "Justice League" are also allowed to do more than just look forward to a gloomy future with a grumpy gaze. Thus, a harmonious dynamic develops between the individual superheroes, which works really well over long distances and is a lot of fun despite some clichés and thickly applied pathos. Also this contribution to the DC universe is far from perfect. But the team around Zack Snyder is at least noticeably on the right track. One problem that all DC movies, including "Wonder Woman" and "Suicide Squad", have suffered from so far is the final. And unfortunately this is no different with "Justice League". Here (not always good) special effects and a fast cut destruction orgy dominate the action.

Zwar also succeeds in loosening up the action a bit with a particularly funny scene, but overall the final fight against Steppenwolf is simply too much of a good thing. So the enthusiasm is a little more clouded. After all, it still has such a high level that "Justice League" can be called entertaining comic-book fun and entertaining popcorn cinema at the end despite its criticism. And for that there is a deserved one: Absolutely worth seeing!

Picture + sound: As was to be expected, the Blu-ray is quite convincing in the technical area. The picture shows an extremely high sharpness of detail, which is not a matter of course in view of the many dark scenes. The artificially appearing colouring can also convince all along the line, as can the image depth, which has also been well tuned in the 2D version. The sound in a Dolby-Atmos TrueHD mix is explosive in the truest sense of the word and lets it really crack with the many action scenes from all channels. But also the quieter moments offer a pleasant spatiality and the dialogues are clearly coordinated with the rest of the tonal events. There is an absolutely deserved one for that: Very good!

Extras: The bonus offer is good, but suggests that certain material has been withheld for a possible further edition. Because the additional film material is limited to two mini sequences, which deepen Superman's return a little (approx. 2:04 min.). There is also a short journey through the comic history of the Justice League (ca. 14:02 min.), a short documentary about the three main characters Batman, Superman and Wonder Woman (ca. 11:52 min.), as well as one about their new companions Aquaman, Flash and Cyborg (ca. 12:24 min.). Featurettes about the technique of the Justice League (ca. 8:14 min.) and its opponent Steppenwolf (ca. 03:03 min.) are complemented by a four-part look behind the scenes (ca. 15:16 min.). Good.

Fazit: "Justice League" did not quite become the movie fans had hoped for after the very successful solo performance of "Wonder Woman". A lot of potential remains unused and is sacrificed to another CGI overkill just for the finale. Nevertheless, the movie is entertaining and a step in the right direction. The Blu-ray is technically well implemented, the bonus material is worth seeing, but, like the film itself, lags behind its potential. Nevertheless: For fans an absolutely worthwhile disc!