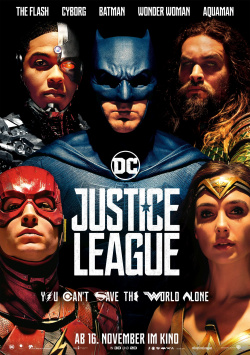 Superman (Henry Cavill) is dead and chaos now seems to rule Metropolis and the rest of the world. Bruce Wayne (Ben Affleck) tries his best to keep law and order as Batman. But when a powerful foe from ancient times returns in the form of Steppenwolf, and once again nothing less is at stake than saving Earth and all of humanity, he realizes he needs help. Together with Diana Prince aka Wonder Woman (Gal Gadot), they set out to recruit other super-powered humans to put a stop to Steppenwolf and his army. But although they manage to assemble a powerful team with Aquaman (Jason Momoa), The Flash (Ezra Miller) and Cyborg (Ray Fisher), in the face of Steppenwolf's incredible power it becomes clear: The Justice League is missing a key member - Superman!

But after Wonder Woman was largely received positively, it also affected the expectation towards Justice League. And indeed, even though the story is so thin it could fit on a postage stamp and the supervillain once again disappoints - both dramaturgically and visually - the entertainment value of this superhero movie is still way up there. There are several reasons for that: For one, it's clear that Joss Whedon, who already successfully brought the Avengers together, is responsible for a reworking of the script and numerous reshot scenes. The reason for this is tragic, however, as Snyder was forced to leave production early due to a horrific incident in his family.

For another, the studio has obviously taken fan criticism to heart and insisted that the tone be a little lighter this time around. And that, of course, is where Whedon's occasionally delightfully self-deprecating tone came in handy. Certainly, with Barry Allen aka The Flash in particular, it feels like he's only in it to provide a few good laughs. He's so obviously designed to be a crowd pleaser that this may well be called manipulative. But it just works. This Flash is funny, at the same time likeable and really cool in his nerdy way.

The other members of the Justice League also get to do more than just scowl at a bleak future. As a result, a coherent dynamic develops between the individual superheroes that works really well for long stretches and is a lot of fun to watch, despite many a cliché and thickly applied pathos. Even this contribution to the DC Universe is far from perfect. But the team around Zack Snyder is at least noticeably on the right track. One problem that all DC movies so far, including Wonder Woman and Suicide Squad, have suffered from is the finale. And that, unfortunately, is no different with Justice League. Here, (not always good) special effects and a quick-cut orgy of destruction dominate the action.

While there is one particularly funny scene that manages to lighten things up a bit, overall the final battle against Steppenwolf is just too much of a good thing. Thus, the enthusiasm is dampened a little bit more. At least it still has such a high level that Justice League can be called great comic fun and enjoyable popcorn cinema in the end, despite its criticisms. And for this there is then also quite clearly a deserved: Absolutely worth seeing!