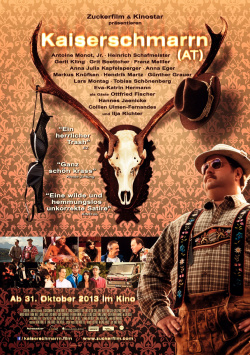 With Kaiserschmarrn (AT), actor and director Daniel Krauss has staged a lurid satire on television making in the form of a homage to the Heimatfilm of the 50s, 60s and 70s. With its colorful Agfacolor look, peppered with little vocal interludes and filled with quirky characters, the comedy is at times reminiscent of the trash factor of Walter Bockmayer's Geierwally. Here, as there, the film's humour and look take some getting used to, although in the case of Kaiserschmarrn (AT) the viewer is pushed hard to the edge of good taste in the first few minutes. Because when Alex at the beginning - please forgive this direct choice of words - literally the shit flies around the ears, then it seems at first rather flat and embarrassing. This scene doesn't actually make sense until later, when the story's intention and satirical nature are revealed. Still, even intellectually infused fecal humor might not be everyone's cup of tea.

This goes for other aspects of the film as well. Even though the side-swipes at television and its makers are occasionally really funny and extremely spot-on, some scenes just come across as very over-the-top and shrill. If you can't get involved with that, you won't discover all the good ideas that are hiding under the colorful surface. But who likes it weird, shrill and somehow different, which will hardly bother even the somewhat less successful gags.

For such viewers is Kaiserschmarrn (AT) then really a great pleasure, which can also amuse with some nice guest appearances. Besides Hendrick Patrick Pacard Martz as an overambitious screenwriter, especially Hannes Jaenicke provides some really good laughs with his cameo appearance as a bored acting coach. You can tell that he and all the other actors had a lot of fun doing this and that they took great pleasure in making fun of their own profession. This is especially true for lead actor Antoine Monot, Jr. who manages his double role absolutely convincingly.

Surely, Kaiserschmarrn (AT) is neither something for aesthetes nor the right thing for lovers of German mainstream comedies. You should already have a soft spot for humor of a more special kind and like it sometimes a little trashy to be entertained by this very special home movie. For such viewers is then but: after a somewhat bumpy beginning well worth seeing!

Cinema trailer for the movie "Kaiserschmarrn (AT) (Deutschland/Österreich 2012)"
Loading the player ...