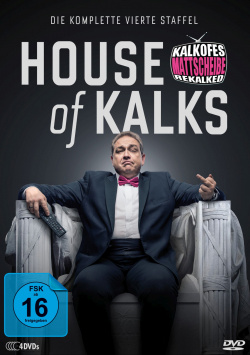 Content: TV junkies really do live in a great time. There are Academy Award winners cavorting in television series, award-winning directors making lavish feature films for streaming services, and top-notch screenwriters creating fascinating worlds and telling grandiose stories. You'd be forgiven for thinking that television has never been better. Fortunately, there is Oliver Kalkofe, who knocks the rose-colored glasses off our noses and confronts us with the bitter truth that between the highlights there are also terrifying abysses into which you, as a TV viewer, also have to look again and again. In his popular satire format Kalkofes Mattscheibe, Oliver Kalkofe has been making us aware of the ills of German television in an entertaining, biting and merciless way for well over a decade.

The fourth season of Kalkofes Mattscheibe REKALKED is once again dedicated to all self-promoters, Z celebrities suffering from overconfidence, talentless musicians, unscrupulous astro charlatans or unspeakably embarrassing TV formats in his usual vicious way. In his sometimes very crude and direct comments, Kalkofe reveals the complete nonsense of the shows, scripted reality formats, commercials or contributions that he takes aim at. In the 15 episodes of this season and the big 2015 review, he pays particular attention to the jungle camp, the RTL summer house, Germanys Next Top Model and the wedding of Daniela Katzenberger. But also so-called YouTube stars get this time again their fat away. Here Kalkofe shows particularly clearly how brazenly the very young target group of these stars is fooled by making them believe in a completely false authenticity.

In some clips you may not even believe that this was really broadcast or that there are actually people who like such things. In fact, there is one good thing to be said about such TV or YouTube formats: Without them, Kalkofes Mattscheibe wouldn't exist. And in view of this once again very amusing fourth season, that would be a real loss for the colorful TV landscape. And that's the only reason why one might hope that, despite the many great series and shows currently being staged, the trash will also continue, so that Oliver Kalkofe doesn't run out of material for his delicious rants. Absolutely worth watching!

Picture + Sound: The picture and sound quality is on a good level for a TV comedy show. The picture is clean, sharpness is decent and colors are powerfully mixed. The audio, which is in Dolby Stereo, conveys Kalkofe's biting comments clearly and powerfully on the speakers, although it's not a bad thing that the whole thing is mainly very central and has little in the way of dynamics to offer. Good!

Extras: Once again, the DVD box set of the fourth season has plenty of extra material to offer. For all episodes there are amusing as well as insightful commentaries by Oliver Kalkofe, directors Lasse Nolte and Daniel Krauss, post producer Jens Menzel and chief judge Oliver Mohme. Every commentary here is absolutely worth listening to! In addition to the commentaries, there is also an extensive making of for the season (approx. 53 min.), which shows how Kalkofe transforms himself into some well-known TV personalities and how the individual episodes were then implemented.

As a special bonus, there is then a very extensive and highly interesting interview with Oliver Kalkofe on Fernsehkritik-TV (approx. 124 min.), as well as his appearance on Pasch-TV (approx. 111 min.) on the fourth disc. Here you can watch Oliver Kalkofe and his companions playing the TV edition of Trivial Pursuit for almost two hours. Doesn't sound particularly entertaining, but it certainly is. Especially for TV junkies who are familiar with slightly older TV fare, this special is absolutely worth watching just for the sake of guessing along!

Conclusion: Kalkofes Mattscheibe REKALKED is again in the fourth season biting TV satire at its best. When Oliver Kalkofe against trash TV (and now also against YouTube), then it is nasty, not always politically correct and sometimes crude - but always hits the nail on the head. The DVD box set presents all episodes of the fourth season, the big review of the year and more than four hours of extras worth watching. Kalkofe fans should definitely not miss this box set. Absolutely recommendable