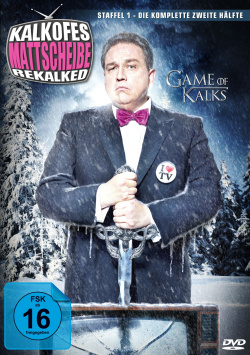 Content: The relaunch of the most biting TV review in Germany is entering its second round! After Oliver Kalkofe proved in the first part of season 1 of "Kalkofes Mattscheibe REKALKED" in an extremely amusing way that his format has lost nothing of bite and entertainment value even after almost twenty years (the detailed review can be found HERE), he finally hands in the second half of the season. And here, too, he goes into the shallows of the German TV landscape to expose the nonsense lurking everywhere and to comment on the innumerable levelulosities in his very special way.

Ob Scripted Reality Formats, Astro-Shows, Z-Promis or Castingshows, nobody is really safe from Kalkofes sharp tongue. Whether Steffen Henssler's rather embarrassing attempt of a rap interlude in his live show, Detlef D Soost and his "10 weeks Body Change Program", an "Explosive"-Tatjana, the woman with the strongest vagina in the world, a reality soap in which a man forces his girlfriend to sort out all the noodle letters for the alphabet soup that do not appear in his name, or a solo entertainer who enlightens viewers about the ambiguity of his hit "Mopsfidel" - all of them turn Kalkofe's comments and parodies strongly through their lack. And the "Man of Kalk" also satirically targets commercials of the German Armed Forces, for sports bras or for a CD set of the duo Goldstars, which was completely incomprehensibly rejected by all the big record companies.

But the special highlight of the second half of the season is the first "Too hot for primetime" show, which gave the box a FSK 16 release. Here it concerns then the strictest Dominas of Germany or a commercial of the seitensprung.ag and naturally also Micaela Schäfer may not be missing in such a transmission. When she tells how much fun it is for her to show her naked breasts and that she is still dissatisfied with her body despite some surgeries, then of course Kalkofe cannot remain silent. If you want to know what kind of special sex toys are offered for men at Live-Strip or what a performance of Xavier Naidoo in the "Sesamstrasse" in the "Too hot for Primetime" episode is looking for, you must not miss this very special episode.

Sicherlich, sometimes Kalkofe's comments are superficially considered hard on the border to level and tastelessness. But where behind the dull façade of the contributions he draws through the cocoa there is actually not much more hidden than pure nonsense, there is behind Kalkofe's rude façade much intelligent wit, a good power of observation and an unrestrained joy in unmasking trash as such. "Kalkofes Mattscheibe REKALKED" is great fun and a must for everyone who loves really good television! Absolutely recommendable!

image + sound: Nothing has changed here compared to the first half of the season: The picture and sound quality is at a good level for a TV comedy programme. The picture is clean, the sharpness is tidy and the colours are powerfully mixed. The Dolby stereo sound transports Kalkofe's biting comments clearly and powerfully on the speakers, whereby it is also not noticeable that the whole thing takes place very centrally and has only little dynamics to offer. Good!

Extras: The second DVD box of the first season also has a lot of bonus material worth seeing and hearing. In addition to amusing spots against illegal downloads and animated menus, each episode features an audio commentary by Oliver Kalkofe, director Marc Stöcker and chief viewer Oliver Mohme. Although Kalkofe and Stöcker already talked for almost four hours in the first half of the season, the comments in the second half still have an extremely high entertainment and information value. And if they can't think of anything to talk about, Kalkofe just reads some bad Fips Asmussen jokes. Even if you never listen to audio commentaries, as a Kalkofe fan you shouldn't miss these entertaining and extremely amusing conversations.

On the third DVD of the set you will find many more extras worth seeing. In addition to a Making of (approx. 26 min.) and Yahoo exclusive clips on Dieter Bohlen and Andrea Berger, the audience can also see Kalkofe's performances at neoParadise (3 + 9 min.) and Circus HalliGalli (approx. 4:32 min.). The latter is an amusing interview that moderator Joko conducted with Kalkofe during a tandem ride through the park.

In the big "Wulff Special" (approx. 45 min.) you can see the true Wulff interview, Wulff in the jungle, the Wulff speech from the Christmas show and Making of Clips to the contributions. The DVD premiere of "Fresse, Fernsehen" live in Berlin (approx. 34 min.) is also entertaining. Kalkofe tells the enthusiastic audience some amusing anecdotes and answers questions from his fans. But that's not all: there are also four episodes of the "food spokesman" (approx. 25 min.), thanks to the producers with gold (approx. 14 min.), silver (approx. 10 min.) and bronze status (approx. 4 min.), as well as video greetings from the set (approx. 18 min.), in which the work of some employees is presented behind the scenes. The mini matte disc of the German Television Award (approx. 4 min.) and set photos round off this great additional offer. Very good!

Fazit: "Kalkofes Mattscheibe REKALKED" shows also in the second half of the first season that the king of TV satire is by no means deprived of the basis for his biting comments. On the contrary: new levels are constantly being explored, which Kalkofe can use in his usual unerring and direct manner. The second half of the first season of the latest incarnation of the popular screen offers 17 15-minute shows, the season finale, two best-of episodes and the "Too hot for primetime" episode, as well as lots of fun bonus material that makes this box simply indispensable for fans. absolutely recommended!