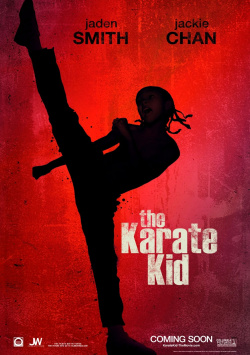 1984 Ralph Macchio as Daniel Laruso became the "Karate Kid" with the help of Pat Morita aka Mr. Miyagi. The film directed by John G. Avildsen became a huge success and is considered one of the very big cult films of the 1980s. Three sequels followed, two of them still with Ralph Macchio and the third with a still very young Hilary Swank, and then it became quiet around the "Karate Kid". Until now, that is, because now "The Pink Panther 2" director Harald Zwart is sending in the remake of the franchise.

While Daniel Laruso only had to move from New Jersey to California back in the day, the journey for the new "Karate Kid" goes a little further: twelve-year-old Dre Parker (Jaden Smith) must move from Detroit to faraway Beijing with his mother Shelley (Taraji P. Henson). The foreign language, the new culture and the not at all familiar environment make the boy hard to deal with. At school, the skilled kung-fu fighter Cheng and his clique make life difficult for him. But when Dre finds a mentor in taciturn janitor Mr. Han (Jackie Chan), who not only teaches him kung fu but also teaches him to appreciate the true values of life, the kid's life could change forever...

One thing Harald Zwart has to be given credit for: Instead of merely delivering a modernized knock-off of the first film, he attempts to wrest entirely new, independent aspects from the familiar story. Right at the beginning of Der's first encounter with Mr. Han, for example, he plays with one of the most iconic scenes of the original in a very amusing way, making it clear to even the last fan that the old familiar is being offered here in a completely new guise.

There's also no denying that Jackie Chan and Jaden Smith have great chemistry and make a very good on-screen duo. And yet: despite wonderful landscape shots, despite some very pretty moments between Dre and Mr. Han, the new "Karate Kid" can't really convince. And that's not because of the fact that there's not a second of karate to be seen in a film titled "Karate Kid", and the film could and should have easily been renamed the more appropriate "Kung Fu Kid" due to its standalone nature. What doesn't really do the film any good is the age of the main character, the look of little Jaden filled with a certain arrogance and the message that is given to the little moviegoers at the end.

While Daniel Laruso was a teenager with typical teenage problems, Dre is just a kid still struggling with teenage problems. So the romance between Dre and Mei Ying, played by Wenwen Han, just seems too contrived and unbelievable. If they would have done without this aspect of the plot, just let Dre be a little bit more of a kid and thus shortened the movie by a few minutes (which would have been quite desirable with a running time of 140 minutes), this wouldn't have harmed the story in any way.

Also as far as the Kung Fu fights are concerned, the age of the Kung Fu Kid comes across rather negatively. After all, it's rather questionable that a mother would cheer on her child to beat another child incapacitated or remain quietly in her seat while her beloved son is being beaten the living daylights out of him. Since the admittedly very well choreographed fight scenes are accompanied by somewhat exaggerated sound effects, fighting here has nothing to do with honor and dignity, but only with violence. The fact that the film has nevertheless been released from 6 years, shows once again how arbitrarily the FSK distributes its age ratings and how untrustworthy this institution is.

Surely, the 2010 "Karate Kid" is not a bad film. The flick is entertaining, bathed in beautiful imagery, and the Chan-Smith duo works really well. However, the somewhat questionable message and the overly precocious lead actor, who owes the role a little too obviously to his celebrity parents co-producing the film, leave a somewhat bland aftertaste. Therefore applies: With small restrictions quite worth seeing!