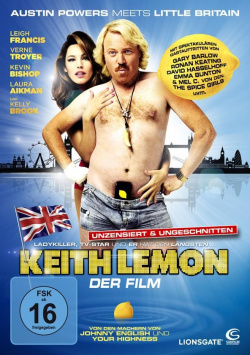 Film: Keith Lemon (Leigh Francis) is tired of dreaming only of success. He finally wants to make it to the top in reality as well. And so he leaves his hometown Leeds and his girlfriend Rosie (Laura Aikman) to make a career in London. But his invention of the Securipole, with which one could allegedly protect one's car against theft, does not really work. And then, as a dyslexic with numbers, he also ordered far too many of the bollards from Fiesen Steve (Leigh Francis), which he now of course has to pay for. And since Keith lacks the necessary small change, the mean Steve kidnaps Rosie and threatens to kill her if Keith doesn't pay quickly. It doesn't look good at all - until Keith presents a mobile phone with a touch screen to the world public in a TV show by David Hasselhoff, with a shiny lemon emblazoned on the back. Everyone now wants to have this cell phone and Keith becomes a heavyweight star. But instead of using his new wealth to free Rosie, he prefers to have fun with model Kelly Brook (Kelly Brook). Will he come to his senses in time to be able to save his Rosie?

Already in the year 2000 the art figure Keith Lemon, embodied by the British comedian Leigh Francis, appeared in the short-lived satirical programme "Whatever I want". Although this was only certified a very short life span, this did not mean the end of Keith Lemon. Between 2002 and 2004 he was able to live out his artificial tan, his nasty accent and his very special humour in the sketch comedy series "Bo'Selecta! The character quickly became a cult figure in England, followed by a show of his own ("Keith Lemon`s very brilliant World Tour"), a comedy game show and various appearances in talk and comedy shows. This popularity should of course be exploited, which is why an own Keith Lemon movie seemed to be a very logical idea.

With "Keith Lemon - The Film" Leigh Francis and his co-writer/director Paul Angunawela have not only managed to persuade many celebrities to make a guest appearance that often lasts only a few seconds. On the page Rotten Tomatoes, where all film reviews are collected and evaluated, they have reached the incredible value of 0% positive reviews. The film is one of the worst British comedies of all time, would simply be embarrassing and would miss any form of subversive joke that Keith Lemon would otherwise have made.

The comedy is certainly not particularly demanding or sophisticated. So the opening scene is a dream sequence in which Keith is allowed to sneeze on his dream wife Kelly Brook's wonderful "horns". Here it becomes immediately clear in which body regions humor is primarily located. A lot of tastelessness follows and also about some really terrible masks, with which Francis also appears as Craig David or Mel B, especially German viewers, who are not familiar with "Bo` Selecta!" and other works of the comedian, should hardly amuse.

Nevertheless the comedy is not as bad as it was made by the English critics. There have been much worse works of art in recent years. Because "Keith Lemon - The Movie" has hidden some really good jokes in this jumble of sex and faecal jokes, where especially the side blows to the Apple cult make for some good laughs. In addition, it proves to be a good decision for the German version that Keith Lemon's dubbing was based on the comedy-tested Michael Iwannek. Iwannek, who has already spoken Chandler in "Friends", Alien Roger in "American Dad" or Zach Galifianakis in the "Hangover"-movies, also wins a certain amount of humor from the not really substantial dialogues by his way.

Nevertheless, it's clear that only those viewers will really enjoy "Keith Lemon - The Movie" who don't value level and like humor of a particularly deeper kind. If you can laugh at sperm showers and want to see David Hasselhoff, Gary Barlow, Ronan Keating, Jedwood or even Billy Ocean (!) in a good mood, you could have a good time here. All others, however, will be inclined to agree with the British critics.

Picture + sound: Rich colours, a good overall sharpness, no dirt or conspicuous picture disturbances - these are the aspects with which the visual implementation of the DVD can convince. The German sound, which is available as Dolby Digital 5.1 mix and dts track, has some nice surround moments to offer in addition to the clearly mixed dialogues. Not a real sound hammer, but more than enough for a comedy. Good!

Extras: No matter what you might think of the film itself, the DVD can be completely convincing when it comes to bonus material. We start with an (untitled) audio commentary by Keith Lemon himself, which he recorded together with his director. All other extras have optional subtitles. It starts with a good Making of (ca. 26 min.), in which a quite amusing look is thrown at the emergence of the comedy. There is also a visit to a script meeting (about 3:10 min.), a short interview with the Douglas played by Kevin Bishop (about 1:10 min.), a slightly different ending (about 2 min.), as well as some outtakes (about 5 min.) and edited scenes (about 16 min.). In addition, there is the trailer for the film and further program tips from the provider. There's really nothing to complain about!

Fazit: "Keith Lemon - The Film" is really not for ghosts. The humor is settled primarily in the lower body regions and reduces itself almost completely to the distribution of various body-juices and zotige Sexwitzchen. But also some really good gags and amusing guest appearances were well hidden in between. If you like it a bit coarse and unrestrained silly and don't attach too much importance to high-class entertainment, you could have your fun here. The DVD is technically well realized and has a lot of additional material to offer, which has a certain fun factor.