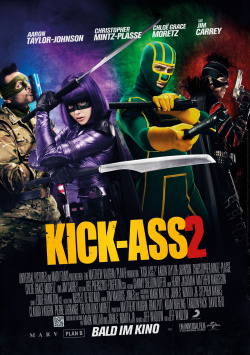 Self-proclaimed superhero Kick-Ass is back! After giving crime boss Frank D`Amico a truly bombshell exit, student Dave Lizewski (Aaron Taylor-Johnson) has actually hung up his Kick-Ass suit and now leaves the crime-fighting to other masked justice fanatics. Inspired by the exploits of Kick-Ass, these have mushroomed. But Dave can't quite let it go that way. This is mainly due to Mindy Macready aka Hit Girl (Chloe Grace Moretz), who wants to continue her father Big Daddy's legacy after his death - even though she promised her foster father, Detective Marcus Williams (Morris Chestnut), to live a normal teenage life from now on. But Chris (Christopher Mintz-Plasse), son of Frank D`Amico and formerly Red Mist, also prevents Dave from fully saying goodbye to Kick-Ass. Because Chris wants revenge, he wants Kick-Ass to pay for his father`s death. And that's why he appoints himself the most dangerous supervillain of all time, recruiting a deadly gang as Motherfucker to blow the life out of anyone who sides with Kick-Ass. Joined by a small intrepid group led by Colonel Stars and Stripes (Jim Carrey), Kick-Ass confronts his as-yet-unknown foe - unaware of the carnage that will soon be unleashed upon the city.

Kick-Ass 2 is a somewhat conflicted affair. On the one hand, the sequel to the film adaptation of the graphic novel by Mark Millar and John S. Romita Jr. also has the politically completely incorrect and morally quite questionable irreverence of its predecessor. And in terms of grotesquely over-the-top brutality, director Jeff Wadlow also follows the path Matthew Vaughn set for him quite consistently. There are many scenes that are just fun in their own special way and are guaranteed to satisfy all fans of the first part. Jim Carrey, with his unfortunately rather short appearance, is the most amusing and best new addition to the significantly increased cast ensemble, though some of the supporting characters fall far short in terms of characterization. The characters Dave, Mindy and Chris, on the other hand, are consistently developed, if somewhat overdone. This works really well for long stretches, with the really interesting developments taking place mainly in the first half of the film.

Despite the high fun factor and quite a few very original scenes, however, Kick-Ass 2 doesn't just leave a positive impression. Especially when it comes to humor, this sequel disappoints more than once big time. Admittedly, the first part was not always a prime example of sophisticated, highbrow wit. But Vaughn has the sometimes very subversive, bitterly wicked humor of the original in his film again and again quite excellent and has thus very effectively countered the moral questionability of the story. Wadlow leaves little room for profound wit in his film. Instead of subversively served social criticism, he much prefers to rely on kicks to the groin and a diarrhea-puking machine. The story really didn't need this kind of adolescent fecal humor. However, since many of the dark and overly violent scenes of the original have been replaced by rather clunky brute humor, the story itself is robbed of much of its power and depth.

This is especially noticeable in a negative way when the viewer is supposed to be emotionally moved. There are two such moments that are well-executed in their own right, but in the setting they hardly achieve the impact they should have. Moreover, the somewhat questionable aspects of the story, which are filled with vigilante justice, sexism and violence against teenagers, don't seem nearly as profound as they did in the first film. Still, even if Kick-Ass 2 can't hold a candle to its predecessor, the sequel once again offers very good anti-superhero entertainment. So if you don't just consume the whole thing without questioning the content and recognizing the satirical elements of the story, you can confidently go on a second crime spree with Kick-Ass and his friends. Worth seeing