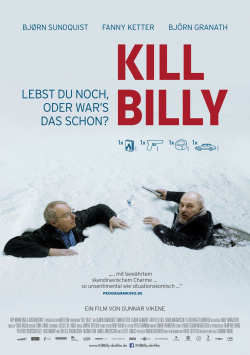 For more than forty years, Harold (Bj&oslash;rn Sundquist) worked with his wife Marny in their small furniture shop. Quality has always been his first priority, even if it has meant that he has never really become rich. But at least it was enough for a quiet life. But now, all of a sudden, that's over. Because right next door, IKEA is opening the largest store in the region, robbing Harold of his last customers. Why spend money on quality when you can get Billy shelves for a song? Harold loses his business and even his house. Then, when his beloved wife dies, he has only one last purpose in life: Revenge! With a gun, he sets out in his old clunker to kidnap IKEA founder Ingvar Kamprad (Björn Granath) - but then events take a surprising turn.

Kill Billy is a mix of black comedy and Nordic gloom that boasts a highly original initial idea. The fact that a small, independent furniture manufacturer rebels against the giant IKEA, which has destroyed its entire existence, holds a lot of potential in itself. However, the turn the whole thing takes after Ingvar Kamprad is kidnapped is the real stroke of genius of the story, as you simply wouldn't have expected it. From this point on, the movie could have actually turned into a fast-paced fireworks display of bizarre gags with a macabre climax that you actually expected from the beginning. But again, the production defies audience expectation and goes in a slightly different direction.

Without giving too much away, it can be said that Kill Billy's story is told in a very restrained manner overall. The humour is rather laconic, the more obvious gags still relatively subtle and the acting of the cast extremely understated. Combined with the atmospheric imagery, a very special atmosphere unfolds in which both amusing and more emotional, serious moments never seem out of place. Sure, you have to be able to get into the pacing. And if you're expecting a Tarantino-esque revenge story with lots of blood and biting humour because of the really nasty-sounding initial situation, you'll probably be disappointed.

On the other hand, if you appreciate Nordic arthouse comedies that don't follow the usual blueprints, you can absolutely recommend this entertaining sideswipe at big corporations like IKEA. Again a successful example that even small films can be great fun and therefore there is also a deserved: worth seeing!