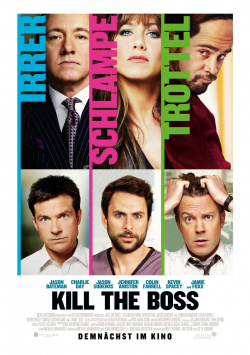 There is hardly a worse situation than when you really like your job, but have to suffer day after day under moody, heartless, choleric or simply unsympathetic superiors. Sure, most people find a way to get along with an unloved boss. But there are also the very unpleasant cases, in which then only one way out seems to help: Kill the Boss.

This drastic solution seems to be for Nick (Jason Bateman), Kurt (Jason Sudeikis) and Dale (Charlie Day) actually the only solution to be able to lead something like a reasonable life again. While Nick's boss Dave Harken (Kevin Spacey) never misses an opportunity to humiliate his lackey, only to rob him of his only chance at a promotion, dental assistant Dale has to deal with the not-so-subtle advances of his manly boss Dr. Julia Harris (Jennifer Aniston). Accountant Kurt seems to have it perfectly together, as his boss (Donald Sutherland) loves him and sees him as the perfect successor. But when the senior dies and the coke-snorting junior (Colin Farrell) takes over the helm, Kurt's daily work routine becomes hell as well. And so there is only one way out: the terrible bosses must be disposed of. This is to be put into practice with the help of an ex-con (Jamie Foxx). But the amateur killers soon realize that a murder does require more than proper anger in the belly.

Director Seth Gordon, who made his feature film debut with the Christmas comedy My Honey, Our Family and Me after his wonderful documentary King of Kong and has since worked on award-winning TV comedies like The Office, Community and Modern Family, stays true to the genre with Kill the Boss. In the process, wonderful situational comedy and crude slapstick balance each other out almost perfectly. What keeps the film from sinking below tolerable levels, even in its sillier moments, is the great cast. Jason Bateman, Jason Sudeikis (All Things Permitted) and Charlie Day (Crazy for You) are perfectly cast as mismatched friends and would-be killers. The three harmonize very well and complement each other perfectly. But they still get the show stolen by the three terrible bosses in many a scene.

Kevin Spacey is fully in his element as the choleric egocentric. Jennifer Aniston, on the other hand, is wonderfully cast against her image as a vulgar nymphomaniac who is as sexy as she is disturbed. And Colin Farrell proves he has the courage to be ugly and silly as a coke-snorting, horny douche with thinning hair. It's clear from these three actors in particular that they really enjoyed working on this comedy. When they get the chance to humiliate and torment their subordinates, they savour it to the fullest. And so the moments in which Nick, Kurt and Dale have to suffer under their bosses are some of the funniest scenes of the film.

When the three go in search of a contract killer, who in the form of Jamie Foxx, however, turns out to be merely a murderous advisor, the film takes on increasingly bizarre forms. After all, when three hypernervous, and thus slightly dorky, employees try their hand at being professional killers, it can only end in chaos - and Seth Gordon has staged this in a racy and extremely funny manner.

While there are a few moments where you get the feeling that Gordon has deliberately slammed on the brakes and the film could have turned out a lot nastier, which would have definitely helped the entertainment value. But even if it lacks a little bite here and there, Kill the Boss is absolutely convincing on balance. A nice comedy for lovers of the somewhat rougher American humor. Since flat silliness and hefty zoten are either avoided or at least very charmingly presented, there is a deserved bottom line: absolutely worth seeing!