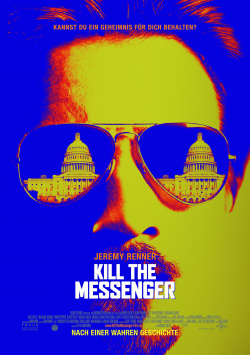 Journalist Gary Webb (Jeremy Renner) may only work for a relatively small newspaper. But that doesn't mean he's satisfied with even small stories. When he gets information linking the US secret service CIA to drug cartels from Central America, he pursues this explosive story despite all the reservations of his editor-in-chief. And indeed, it seems to prove true that tons of drugs were imported into the U.S. with the intelligence's knowledge, which was used to finance the Contra rebels in Nicaragua. At first, Webb is celebrated for his revelations and even awarded the Pulitzer Prize. But then the tide suddenly turns: Webb becomes the victim of an unexpected smear campaign that not only muddies his research, but also costs him his job and reputation. But the battle is far from over...

Director Michael Cuesta (Dexter, Homeland) has directed Kill the Messenger, a gripping political thriller in the tradition of classics such as The Untouchables and The Three Days of the Condor. The film derives its tension primarily from Webb's research and what it unearths. Thus, the film is not really something for adrenaline junkies, but for those viewers for whom suspense can also develop through dialogue. What is particularly shocking is how easily a journalist who is respected in his own right can be discredited and that it is impossible to restore his reputation, even when years later his findings are confirmed as true, only because all the media attention is then devoted to the president's affair with his intern.

The cinematic reappraisal of the true events works not only because of the good script and an atmospherically dense production. The very good cast also makes this mix of thriller and drama so worth watching. Jeremy Renner is absolutely convincing in every second as a journalist with a great sense of justice and an even greater ego. And also the supporting actors like Oliver Platt, Michael Sheen, Andy Garcia, Robert Patrick, Paz Vega or Tim Blake Nelson make Kill the Messenger into rousing old-school acting cinema.

But unfortunately, in the film's great strength also lies its weakness. Because movies like this just don't get made anymore and therefore elude the tastes of the masses. Like Sate of Play with Russel Crowe, Cuesta's film feels like a relic from a bygone era. As a result, it's almost impossible for this superbly directed film to reach the wide audience it deserves. But in times when even political thrillers can't do without gripping action anymore (which of course doesn't make them worse per se), a movie that also spends a lot of time on the private background of the main character might just have a hard time grabbing the audience's attention. Yet the story told here is really extremely exciting.

For those who love old-school political dramas and are interested in stories that should have made much higher waves than they eventually did, for whom suspense is not only created by car chases and explosions, and who appreciate the importance of investigative journalism, this is definitely a work not to be missed. Absolutely worth seeing!

Cinema trailer for the movie "Kill the Messenger (USA 2014)"
Loading the player ...