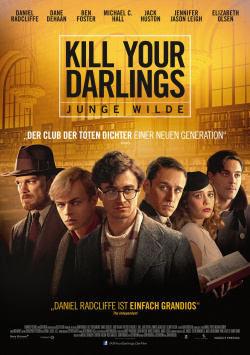 When Allen Ginsberg (Daniel Radcliffe) arrives at New York's Columbia University in 1944, the whole world seems open to him. But the young man soon realizes that he feels like a foreign body in the elitist circles of his fellow students, and he wants to break out of his professors' strictly prescribed teaching concepts. Allen finds a kindred spirit in the maladjusted Lucien Carr (Dane DeHaan). Through Lucien, he soon joins a small circle of unconventional literature lovers united by their quest to break away from old conventions. Together with Lucien, Jack Kerouac (Jack Huston) and William S. Burroughs (Ben Foster), Allen spends more time in the underground scene of Greenwich Village than in his seminars. The experiences he has there, including with drugs, fuel his literary genius - but his mentally unstable mother (Jennifer Jason Leigh) and Lucien's possessive lover David (Michael C. Hall) continually slow Allen down in his creative frenzy.

Kill your Darlings is an engaging portrait of three friends whose work not only revolutionized the literary scene, but simultaneously sparked a whole new youth culture. Allen Ginsberg, William S. Burroughs and Jack Kerouac are considered to be the founders of the so-called Beat Generation, who were characterized by a rejection of established rules and traditions, as well as provocation and spontaneity. This repeatedly called the guardians of public morals to the scene, but found enormous appeal, especially among young people. Kerouac's novel On the Road, Ginsberg's poem Howl, or even Naked Lunch by Burroughs became cult and still enjoy enormous popularity and relevance today. After Kerouac's novel was recently made into a film (On the Road) and Howl and the controversy surrounding the poem were also made into a film, director John Krokidas now devotes his biopic to the beginnings of the Beat Generation.

The increasingly destructive friendship between Allen Ginsberg and Lucien Carr is at the center of the story. The film does a very good job of tracing how the still rather clueless Allen is jolted out of the conformity of his studies by the fascinating charm of Lucien, and how he discovers a whole new world through him, in which he eventually finds himself and his art. At the same time, Kill your Darlings also reveals the destructive power of fear, envy and jealousy, leading here to a dramatic event through which the later work of Allen Ginsberg in particular will also be shaped. In telling this story, Krokidas also gradually traces the genesis of the Beat Generation's most important works. And that's exactly what makes this film so appealing, which only superficially seems like a normal college movie.

But it's precisely this rather conventional staging that allows viewers who aren't familiar with the works of Ginsberg, Kerouac, and Burroughs to understand and enjoy the story. At the same time, viewers who are interested in this very special period of American literary history will also get their money's worth. This is of course on the one hand due to the coherent script, which is full of allusions to the later works of the three friends. On the other hand, however, it is also due to the very good actors that the film works so well. Whether Ben Foster, Dane Dehaan or Michael C. Hall, they all deliver really convincing performances. The biggest surprise, however, is Daniel Radcliffe, who once again strays far from his Harry Potter image. It is often the case that actors who are identified with a certain role try too hard to detach themselves from it. But with Daniel Radcliffe, the image change doesn't seem forced. He simply delivers a stellar acting performance here that makes you forget all about the young wizard student from Hogwarts very quickly.

At times Kill your Darlings may seem a bit unwieldy, the dialogue a bit too strained cerebral and the visuals a bit too drab. But all in all John Krokidas has succeeded in making a gripping and more than solid feature film debut that captures the zeitgeist of the late 1940s very well and tells a very rousing story along the way. For lovers of the more demanding American arthouse cinema absolutely worth seeing!