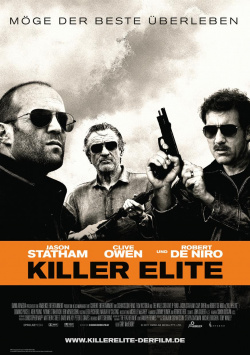 Every filmmaker should dream of this: right for his feature film debut, director Gary McKendry was able to unite a great ensemble of actors in front of his camera. In addition to action star Jason Statham, who once again shows his fighting side, Clive Owen and Robert De Niro were signed on for other leading roles. Together they provide in Killer Elite for action and suspense of a particularly entertaining kind.

Actually, the mercenary Danny (Jason Statham) had finished with his job. He no longer wanted to get his hands dirty for the secret services and instead preferred to enjoy life in Australia alongside his childhood friend Anne (Yvonne Strahovski). But when his former partner and mentor Hunter (Robert De Niro) is kidnapped by an Omani sheik, Danny must return from early retirement and take on a new assignment to save his friend's life. If Danny manages to kill the men who murdered the sheik's sons during the Oman war, Danny will go free. What at first sounds like a simple job becomes particularly explosive when Danny learns that the killers are members of the British special forces SAS, who are also under the protection of a powerful secret organization. When Danny nevertheless manages to take out the first target, ex-SAS fighter Spike (Clive Owen) gets ready to face his unknown opponent. A murderous cat-and-mouse game begins.

Killer Elite is superbly directed action cinema, a mix of spy thriller, mercenary action and conspiracy thriller that has all the ingredients for the best entertainment cinema. Based on the novel The Feather Men by former SAS soldier Ranulph Fiennes, Gary McKendry has succeeded in creating a gripping thriller that truly doesn't need to fear comparison with the Bourne trilogy. Although the film uses quite a few clichés and secondary characters such as the known from the series Chuck Yvonne Strahovski for the story are actually completely unnecessary, but on balance, the positive aspects outweigh then.

That also includes that the staging despite some fast-paced action scenes and thrilling duels somehow rather old-fashioned seems. And that can definitely be taken as a compliment here. Instead of relying entirely on loud explosions, pace and quick cuts, McKendry gives the complex story time to unfold. This does make for slight signs of fatigue, especially in the final third. But boredom never really arises thanks to the good actors.

While Jason Statham can convince again as an action hero, but delivers no real surprise, Clive Owen pleases in the role of the tough adversary. Owen, who has convinced both as an action hero (Shoot `Em Down), a concerned family man (Trust) or as an anti-hero (Children of Men), should play the villain more often. Because he can also do that damn well, which increases the entertainment value of the thriller enormously. Robert De Niro is a bit underused, but provides some very good scenes in the moments he is on screen. And there are many a positive surprise among the supporting cast as well, most notably Danny's posse. Prison Break star Dominic Purcell, for example, is a real asset to the film.

Killer Elite thus offers very good entertainment, despite minor hang-ups and some overused clichés, both for lovers of cleverly constructed spy thrillers and for fans of solid action. Worth seeing