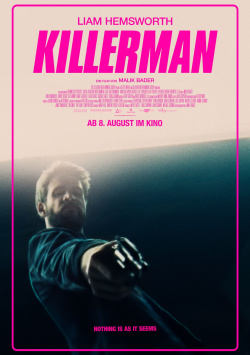 Moe Diamond (Liam Hemsworth) is a master at laundering money. So far, he's limited himself to smaller amounts, but now he's supposed to pull off the really big deal for drug lord Perico (Zlatko Buric). But when the deal is unceremoniously canceled because the FBI has allegedly planted a mole in Perico's circle, Moe and his partner, Perico's nephew Skunk (Emory Cohen) want to land the big score themselves - with the godfather's money. Of course, the plan goes awry and a wild chase leads to a serious accident, which Moe barely survives. Unfortunately, he lost his memory in the crash. With no memory at all, Moe must protect himself and Skunk from the FBI and from Perico. And soon the whole thing turns into a bloody vendetta, at the end of which not only many corpses, but also a big surprise await Moe.

With Killerman, Liam Hemsworth tries to break away from his clean-cut teen image. And he doesn't do a bad job of it at all. As an avenger with no memory, he delivers some really compelling moments in the thriller. Director Malik Bader does a great job of laying the groundwork for a tense gangster thriller, especially in the beginning. But unfortunately, there are also aspects of his production that make the result look a bit too much like a trashy B-movie. Take Zlatko Buric, for example, who almost looks like a bad parody of a gangster boss with his shaggy hair. His acting, which seems a bit awkward at times, especially in his gestures, doesn't really help make him look like a menacing villain.

Then there's the relationship between Moe and Lola, played by Diane Guerrero of Orange is the new Black fame. Neither the actors, nor the production manage to believably convey that Lola is Moe's one true love, for whom he would simply do anything. Such flaws aside, however, Killerman works quite well overall. After a successful opening credits, which accompanies Moe on his money laundering tour through New York, it takes a little while until the whole thing gets going. But at the latest when Moe starts his vendetta, the entertainment value also goes up significantly.

This does little to change the fact that Killerman is a film that you don't necessarily need to have seen in the cinema. The visuals are kept very simple, and constantly reveal the low-budget nature of the production. In principle, this isn't a bad thing, but it also doesn't offer the audience any real added value. Apart from the successful twist in the last act, the thriller is absolutely standard stuff, as it has been seen a hundred times before. Solid, but neither particularly original, nor outstandingly implemented. That's why there is only one: Worth seeing!

Cinema trailer for the movie "Killerman (USA 2019)"
Loading the player ...