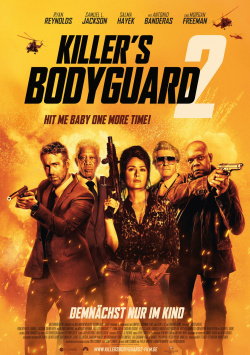 His adventure with hitman Darius Kincaid (Samuel L. Jackson) has left its mark on former bodyguard Michael Bryce (Ryan Reynolds): he's lost his license and is plagued by nightmares night after night. For his psychiatrist, it's clear Bryce needs some time off. A vacation on Capri is supposed to fix it. But no sooner does Bryce relax by the pool than a wild shootout breaks out. In the middle of it is Sonia (Salma Hayek), the internationally wanted wife of Kincaid. And promptly the ex-bodyguard is in a new bloody adventure: First, Darius Kincaid must be freed, and then Europe must also be saved from the machinations of a dangerous Greek (Antonio Banderas) - for Bryce, plenty of new material for his nightmares...

The action comedy "Killer`s Bodyguard" was a bit of a surprise success in 2017: With a fairly manageable budget of $30 million, the film managed to gross about five times that amount worldwide. So it didn`t take long for director Patrick Hughes to get the green light for a sequel. When watching "Killer`s Bodyguard 2"I kept thinking of the 2000 gangster comedy "No Half Measures" starring Matthew Perry and Bruce Willis and its less than successful sequel. Not only do both share certain similarities in content. In both cases I found the first movie amusing and entertaining, while the sequel seemed too forced and overdone. For me, actually all the ingredients are right, but the execution unfortunately can not convince.

I like Ryan Reynolds and Samuel L. Jackson, but could already laugh in the first part especially hearty about Salma Hayek as a constantly swearing gangster bride. I had high hopes that the trio would keep me entertained in the second installment. But director Hughes was apparently so concerned with topping the original in every way that any sense of timing and biting dialogue was lost in return. Instead, over-the-top brutality and slap-dash humor dominate the proceedings.

This is still quite entertaining in places. But overall, the sequel falls far short of its potential. Even Antonio Banderas as the villain and Morgan Freeman as Bryce's stepfather can't do much about it, unfortunately. For this, it simply would have needed a better script and a more restrained direction. If you just want to see bloody action and simple gags, this is absolutely the right movie for you. But if you were hoping for a clever action comedy that also does justice to the actual skills of everyone involved, you'll definitely leave the cinema disappointed. Here, on balance, there is still a: worth seeing - but that only with some significant deductions!