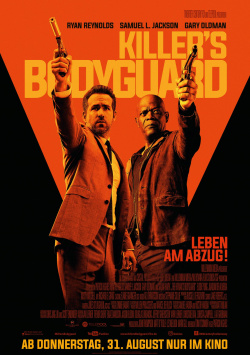 Once upon a time Michael Bryce (Ryan Reynolds) was the best bodyguard money could buy. But after a job went wrong, his reputation went down the drain and his life went off the rails. But now he is supposed to make sure that the notorious hitman Darius Kincaid (Samuel L. Jackson) gets safely to The Hague, where he is supposed to testify against the war criminal Dukhovic (Gary Oldman). But it's not just his henchmen that make this endeavor extremely complicated and leaden. Bryce and Kincaid`s shared past also repeatedly leads to enormous tension between the men, which literally makes for some very explosive moments.

No innovations should be expected from a film like Killer`s Bodyguard. Nor should one necessarily assume high-minded dialogue or sophisticated dramaturgy. But director Patrick Hughes (The Expendables 3) didn`t want to reinvent the wheel, but to stage an entertaining action-comedy, which should remind you of the great buddy-comedies of the 80s. And that's exactly what he managed to do very well. Of course, the film lives especially on the good chemistry between Ryan Reynolds and Samuel L. Jackson, who just verbally play the balls to each other so skillfully that this is quite a pleasure even in somewhat tame or hackneyed moments.

You can tell them just like Salma Hayek that they had great fun playing such overdrawn characters. What doesn't work so well, on the other hand, is when the whole thing takes on a more serious tone. The conflict between Bryce and his ex, played by Elodie Yung of Netflix series Daredevil fame, is played out a little too much, and the cruelty committed by Dukhovic feels a little out of place in its intensity in an otherwise light action comedy. But Hughes fortunately makes up for such shortcomings quite quickly with steadily picking up the pace and some really good action.

Except for two or three scenes, the humor isn't too over-the-top and goes into perfect harmony with the not-so-squeamishly staged shootouts, duels and car chases. Yes, it's not particularly original, and it's not exactly sophisticated. But if you just want to have lots of fun and appreciate well-done action without too obvious CGI effects, you'll be very well served here. And that's why, despite a few minor weaknesses, the bottom line is a satisfied: Absolutely worth seeing!