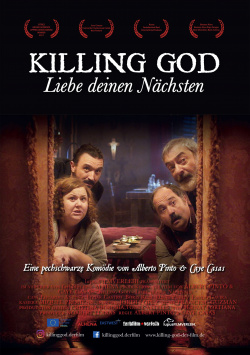 It's not exactly a contemplative family dinner when a couple estranged due to an affair, the husband's depressed brother, and the grandpa who blows his pension on prostitutes meet at a remote country house. But then New Year's Eve gets really dark when a mysterious dwarf shows up claiming to be God. After a thoroughly believable demonstration of his abilities, the family is willing to listen to the stranger. But what he has to say sounds almost more insane than his claim to be the Almighty: At dawn, all of humanity would die - except for two chosen ones, to be determined by the Four. If this is really true - who are they to designate to become part of the new world? Who should be sacrificed and who should be allowed to live on? Or is there another way out?

Filmmakers Caye Casas and Albert Pint&oacutely; posed the question over dinner one night with glee: If the world ended tomorrow and you could only save two people - who would you choose? The lively discussion that ensued inspired the pair to make their feature debut, Killing God - Love Thy Neighbor. And so the deep black comedy is first and foremost a chamber play in which there is a lot of talking. In the process, the abysses of the human soul are revealed more and more. This is sometimes wonderfully biting and wonderfully bizarre, but at other points it's also a bit tough. Because, unfortunately, this basic idea wasn't fleshed out well enough to carry a feature-length story.

Towards the end, the action escalates and turns into a bitterly nasty splatter comedy, which once again reveals the potential of the underlying idea. The fact that a lot of questions remain unanswered or are only asked by the viewer, but aren't even addressed in the film, actually doesn't bother as much. What ultimately leaves a somewhat ambivalent impression is the fact that the story takes a long time to really get going (half an hour passes before God appears) and that some discussions go around in circles a bit too much. You get the feeling that the makers wanted to take a material that would have been perfect for a short film and blow it up into a feature-length movie at any cost.

Despite that: a certain entertainment factor can't be denied to Killing God - Liebe Deinen Nächsten, especially since the film inspires a really interesting discussion, which you'd better not have in the family circle. But you catch yourself as a viewer already thinking about the question who you would save yourself. For this and for some very successful moments the film gets for genre lovers then despite its lengths still a: Worth seeing!