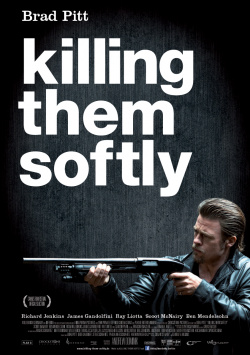 It was supposed to be a surefire thing: small-time crooks Frankie (Scoot McNairy) and Russell (Ben Mendelsohn) are supposed to rob an illegal card game hosted by Markie Trattman (Ray Liotta). Suspicion would inevitably fall on Markie, who boasts of being responsible for a robbery at an earlier tournament. The plan seems to work at first, the two scam $50,000 and make off without being recognized. But they don't yet know who they're up against. Because the mob that controls the illegal games must now let them rest until the perpetrators are eliminated. And so their best man, enforcer Jackie Cogan (Brad Pitt) is put on the case. Along with Mickey (James Gandolfini), a once formidable hitman, Jackie is determined to clean up the mess Frankie and Russell have made as quickly as possible. But that proves far more difficult than first thought.

Following his rather unconventional western The Assassination of Jesse James by the Coward Robert Ford, Andrew Dominik now delivers a no less unusual gangster ballad with Killing them Softly. Set against the backdrop of the 2008 presidential election, the story, set in a New Orleans badly battered by Hurricane Katrina and the bursting of the economic bubble, is far more than a simple thriller. Rather, Andrew Dominik has directed a gritty portrait of the brokenness of American society and a swan song to the American way of life. This is more challenging head-scratcher than simple popcorn entertainment, more dialogue-heavy chamber drama than lead-heavy action cinema.

And therein lies the film's difficulty. The story that makes it all up on the surface is relatively simplistic. Killing them softly only reveals its real depth in its lengthy dialogue sequences, some of which seem to consist of nothing but swear words. These dialogues, in combination with radio reports and television broadcasts on the presidential election running in the background, create a completely different, more multi-layered picture, through which the real finesse of the film is revealed. Discovering this, however, requires the viewer to struggle through the sometimes somewhat exhausting dialogue, to engage with the inherently completely unsympathetic, broken characters, and to read intensely between the lines. This makes the film arguably unwieldy and rather inaccessible to a wider audience who just want to be entertained well.

In terms of acting, however, the film is beyond reproach. Whether it's a cool as hell Brad Pitt, a disgustingly sleazy Ray Liotta, or a delightfully washed up James Gandolfini (The Sopranos), they all elevate the entertainment value of the film considerably with their performances. The bottom line is that Killing them Softly is a dirty, gritty thriller and a biting social satire at the same time. The excellent actors act confidently in the rather unwieldy dialogue scenes, making the film especially appealing to viewers who appreciate American arthouse cinema of the somewhat exhausting, but in some scenes also very bloody kind. Worth seeing

Cinema trailer for the movie "Killing them softly (USA 2012)"
Loading the player ...