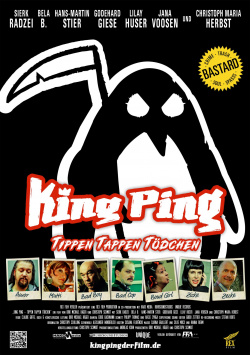 Once Clemens King Frowein (Sierk Radzei) was a real force in the Wuppertal police. But after three years of undercover investigation into a child porn ring, he himself wanted to bring the head bastard, who thanks to political connections didn't go to jail, to justice. Now King is a penguin keeper at the Wuppertal Zoo and lives with singing hairdresser Biggi (Bela B.) as a subtenant. It is actually a very pleasant life, but in him still beats the heart of a real bull. He realizes this when his former partner Dieter Ahaus (Hans Richter) dies in an alleged fall down the stairs. But King doesn't believe it was an accident, especially since there have been several deaths due to falling down stairs in a very short time. Since his successor Rainer Ellbroich (Godehard Giese) is a total loser, King takes the investigation into his own hands. Together with his zoo colleagues Sülli (Sinan Akkus) and Salva (Marco Wohlwend), whom he henceforth only calls C.S.I Grottenolm, and with the help of bouncer Wölfken (Hans-Martin Stier), he wants to get to the bottom of the Ahaus murderer. But he quickly has to learn on his own body that there are people who want to prevent with all their might that King sticks his nose into things that he should not really care anymore.

In the press booklet producer Christoph Schmidt calls King Ping - Tippen Tappen Tödchen a genre bastard with its very own charm. And with that, he hits the nail on the head. The film, made entirely of equity, is certainly not the first work to mix crime with comedy. But the way it's done here is extremely unusual, especially by German standards, original, quirky and very, very funny. Screenwriter Dirk Michael Häger and director Claude Giffel, who makes his feature film debut here, always manage to vary familiar set pieces in such a way that they defy the audience's expectations. For example, it's not unusual for a crime thriller to present the police investigation as a montage accompanied by a snappy song. But when the whole thing takes the form of a Bravo photo love story and the underscoring song is a nasty pop song about Wuppertal girls, that's something you really didn't expect.

The decision to cast Bela B. from Die Ärzte in the role of the singing hairdresser Biggi also underscores the film's quirky character, as does Hans-Martin Stier's performance as gay bouncer Wölfken. Certainly, the humour doesn't always hit the mark or is particularly compatible with the masses. Especially the very present Wuppertal local colour is unlikely to be understood by most viewers outside the Ruhr area. The screenplay also has a few small lengths or logic holes here and there. Nevertheless: the film has enough wit, charm and originality to easily console over the small weaknesses.

A particularly positive aspect is that despite a rather difficult financing, a tight shooting schedule and the rather short-term engagement of director Claude Giffel, the film does not look like a B-movie at any moment. On the contrary: the camerawork is top-notch, the colouring extremely atmospheric, the choice of locations is perfect and the use of editing, music and interspersed penguin animations also make the crime comedy look really good. It also has a very positive effect that with Sierk Radzei (Add a Friend) a rather unspent face was cast. Radzei, who really does not correspond to the image of the typical cinema hero, is simply wonderful as a coffee-loving ex-cop and can not be played even by colleagues such as Christoph Maria Herbst, who shines here as an annoying local reporter to the wall.

Sure, King Ping - Tippen Tappen Tödchen will hardly open to the very large audience. For that, the film is simply too different from what you usually get to see in the cinema. But this is exactly the great strength of the Wuppertal crime film: it dares to go different ways, to be a bit dirtier, more unconventional and quirkier, detached from the strict guidelines a typical studio production is subject to. And that is a real blessing. If you can overlook a few less successful moments and like it a bit more special, you should definitely go on a murder hunt with the penguin keeper. Worth seeing