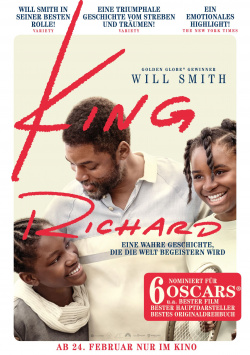 Richard Williams (Will Smith) lives with his wife (Aunjanue Ellis) and his two daughters Venus (Saniyya Sidney) and Serena (Demi Singleton) in simple circumstances in Compton, California. Poverty and violence determine everyday life here, but that doesn't stop Richard from fighting for a better future for his daughters. And he sees that future in the girls' great tennis talent. Richard's declared goal is to promote and develop this talent. To this end, he sometimes takes on gang members and canvasses the elite in the tennis clubs for the support of his daughters. In fact, Richard's perseverance pays off one day, and even though his father often offends other people with his manner, his conviction proves to be correct: His daughters are destined for something great...

"King Richard" tells the true story of the rise of the two sisters Venus and Serena Williams to the tennis Olympus and of the contribution their father Richard made to it. Director Reinaldo Marcus Green takes a lot of time to portray the man who doesn't let anything stop him from paving the way he sees destined for his daughters. He takes a beating or drives potential backers crazy, and though he's never played tennis himself, he seems to know exactly what he's doing. One is inclined to believe that the man goes a bit too far with his downright obsession and wants to force something on his daughters. But in fact the girls themselves believe in their talent and are happy that there is someone who fights so hard for them.

At the center of the film is clearly the strong play of Will Smith, who once again proves that he is just in such roles really good. Smith rightly received an Oscar nomination, a SAG Award and many other awards and nominations. Especially when you see footage of the real Richard Williams in the credits, you realize how well he captured his character. He plays the father of later tennis legends with a mixture of stubbornness and charm, of tough ambition and fatherly love. But Saniyya Sidney and Demi Singleton, who play his talented daughters, also do a really great job. You can feel the close bond that exists between the two sisters, which was always on display in later years during their unique tennis careers.

"King Richard" is a bit too long at just under two and a half hours. But that aside, it's a very engaging and inspiring film, buoyed by strong performances and a fascinating success story. If you like sports movies and interesting biopics, you shouldn't miss this six-time Oscar-nominated film: Absolutely worth seeing!