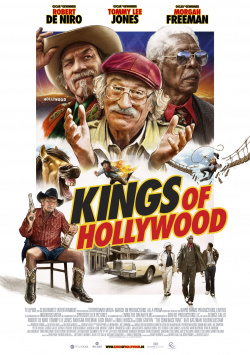 Los Angeles, 1974: Hollywood producer Max Barber (Robert DeNiro) has truly seen better days. Now he has to deal with flops and his mob backers. Only his nephew Walter (Zach Braff), with whom he runs Miracle Motion Pictures, still believes in the old warhorse. But when Max has once again made a complete mess of a project and has little time to pay back the money of the shady Reggie Fontaine (Morgan Freeman), Max comes up with an idea: During the shooting of his next film - an action-heavy western - the main actor should simply die in a daredevil stunt and the insurance money can be used to pay off Reggie. It's just too bad that disillusioned Western star Duke Montana (Tommy Lee Jones) just can't be killed. But then something completely unexpected happens: the movie seems to be getting really good...

"Kings of Hollywood" is based on the 1982 comedy "The Comeback Trail". George Gallo, who has had particular success as a screenwriter ("Midnight Run", "Bad Boys"), directed Harry Hurwitz's original as a vehicle for Hollywood's veteran stars Robert De Niro, Tommy Lee Jones and Morgan Freeman. At the same time, the whole thing is also a satire on the beautiful make-believe world of Hollywood. As amusing as many scenes are, the movie lacks a bit of bite to deliver big laughs. It is fun to watch Max sabotage his film with his attempts to make it become a masterpiece. But unfortunately, too many scenes that are supposed to be funny just come off as flat or too messy to really work.

This is especially evident with the character of movie-loving mobster Reggie, who doesn't come off as properly threatening or too over-the-top funny. Especially towards the end, his performances seem very flat and even the great Morgan Freeman fails to infuse them with the necessary wit it would have taken to make the audience laugh. Other moments, however, like the involuntary demise of a self-absorbed movie star, show the potential this comedy has. But it almost seems as if Gallo didn't dare to get really nasty, which just leads to a rather shallow overall picture in the end.

"Kings of Hollywood" has strong moments as well as funny ones. Robert De Niro, Tommy Lee Jones and also Zach Braff deliver solid performances. The movie is definitely fun in its own way - but it could have been a lot more than the well-behaved fun it ended up being. If you're not expecting more than nice entertainment, you certainly won't be disappointed. However, if you're hoping for a comedy with bite and a tongue-in-cheek sense of humor, you'll only get that in a few scenes. Therefore, the decent "Seeable" also only with some deductions!

Cinema trailer for the movie "Kings of Hollywood (USA 2020)"
Loading the player ...