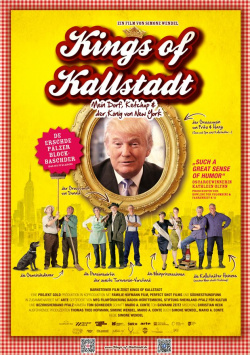 Kallstadt - an idyllic winegrowing village right on the Palatinate Wine Route. Here the sun is always shining and the wine flows in streams. Every year four million litres of wine are pressed here. The people who live here love the sense of community. There are 27 clubs with 1600 members - and that with just 1200 inhabitants. No question about it, the tranquil village seems to be a piece of an ideal world. But there is something else that makes Kallstadt a very special place. Because the ancestors of real estate tycoon Donald Trump, also known as the King of New York, as well as the founders of the Heinz tomato ketchup dynasty come from here. Filmmaker Simone Wendel, who herself grew up in Kallstadt, wants to get to the bottom of the question of whether it is just a coincidence that two such success stories have their origins here in the Palatinate or whether the people of Kallstadt are perhaps born with a certain entrepreneurial spirit. For this she not only interviews the descendants of both families in Kallstadt, observes village life and especially the preparations for the big Saumagen-Kerwe, but also travels to New York to talk to Donald Trump about his Palatinate roots. The result is the charming, amusing, and thoroughly interesting documentary Kings of Kallstadt.

The whole thing takes on unexpected proportions when a group of Kallstadt residents are invited to attend the popular German-American Steuben Parade in New York - at the start of the wine harvest, of all things, and the festival season that goes with it. So a small delegation of Kallstadters sets off across the big pond, while preparations for the festivities in the Palatinate continue with their usual serenity. The portrait of this winegrowing village and its history is always reminiscent of the wonderful Wacken documentary Full Metal Village. Here, as there, two opposing worlds collide, and in both films the villagers are humorously introduced and accompanied by the camera without being paraded.

This makes for a very charming portrait that should, of course, be worth watching especially for viewers from the Palatinate, but which will also make for extremely good entertainment in other parts of Germany. This is because the focus here is not only on the small Palatinate winegrowing village, but also on the story of two enormously successful emigrant families. And this success story is not only interesting, but also, as it is told here, very entertaining and amusing. Whether it's a visit to a Heinz test supermarket, the song from the Schnitzel bank or the reaction of New Yorkers to the God of Wine - when the Palatinate meets the USA, it's just wonderful to watch.

For those who want to dig a little into the family history of Donald Trump and the makers of Heinz Ketchup, or for those who simply want to take an amusing detour to the Palatinate, Kings of Kallstadt can be warmly recommended. For lovers of documentaries like Full Metal Village: Absolutely worth seeing

Cinema trailer for the movie "Kings of Kallstadt (Deutschland 2014)"
Loading the player ...