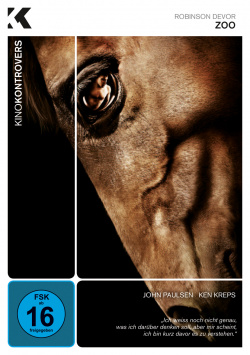 Film: In 2005, a death shakes the small town of Encumlaw in Washington State. Here, in idyllic nowhere, engineer Kenneth Pinyan died as a result of internal bleeding in his intestinal area - the result of sexual acts with a stallion. After the media pounced on the case and exploited the bizarre death in the most lurid way possible, filmmaker Robinson Devor took another look at the story, hoping to tell it from a slightly different angle without the usual sensationalism.

To that end, Devor has conducted numerous interviews, with police officers, veterinarians, but also with people who share the same sexual proclivity with Mr. Hands, as Pinyan has called himself on the Internet. It is to Devor's credit that he has tried to take the most value-free look possible at a taboo subject with Zoo, in order to make clear to the viewer what may be going on in zoophilic people. At the same time, however, he also runs the risk of conveying the feeling that he is condoning and trivializing the tendencies and occurrences addressed here. Because unfortunately, for all its ambitions, the film misses the opportunity to really enlighten the viewer. The very restrained and thoroughly sensitive production seems to be trying too hard not to act as a moral authority, that as a result the whole subject matter is approached too uncritically.

Positive, on the other hand, is the way in which Devor presents his research. Instead of using the usual stylistic devices of documentaries, he just lets his interviews sound off-screen and punctuates them with re-enacted game scenes or simply fascinating images. In this way, the film actually succeeds in freeing it from the feared sensationalism and tackling the taboo subject very sensitively and without any obvious shock moments.

This is not to say that Zoo does not shock and disturb. But even though as a viewer you would prefer to turn a blind eye to the subject matter, and although the film unfortunately doesn't really seize the opportunity for a real basis for discussion, the bottom line is that this docudrama is a thoroughly interesting work that is truly well-served in the Kino Kontrovers series.

Picture + Sound: The sometimes almost disturbingly beautiful images come on the DVD thanks to a good color scheme and coherent overall sharpness neatly. The sound remains very restrained in terms of both music and dialogue, which is why the stereo mix at hand is perfectly adequate. Good!

Extras: In addition to a booklet with an essay on the film and a conversation with the director, the DVD also has a not uninteresting audio commentary by director Robinson Devor and co-screenwriter Charles Mudede, as well as the original theatrical trailer for the film to offer.

Conclusion: Zoo is a very ambitious attempt to approach the difficult and uncomfortable subject of zoophilia. Unfortunately, in attempting to leave the moral judgement solely up to the viewer, the production simply remains too superficial for such a subject matter. The great camerawork and refreshingly different style of staging can only make up a little ground. The DVD is technically well realized, the bonus material is quite meager with an insightful booklet and an audio commentary, but informative turned out