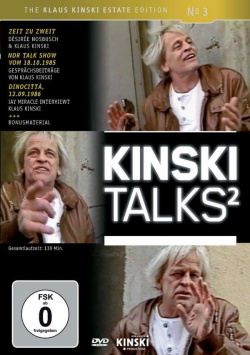 Content: With "Jesus Christus Superstar" and "Kinski Talks" two real gems for all fans of the eccentric actor have been released in recent years. Both the concert film and the collection of interviews are not only first-class contemporary testimonies, but also an extremely entertaining as well as exciting opportunity to gain an insight into the complex personality of Klaus Kinski. After the great success of "Kinski Talks", Peter Geyer, the executor of Kinski's estate, decided to dig up more of Klaus Kinski's TV appearances and press them onto DVD. The result, "Kinski Talks 2", again offers over two hours of pure Kinski in three features that can absolutely be called treasures in this one.

Los it goes with an edition of the series "Zeit zu Zweit", in which the then 17-year-old Désirée Nosbusch interviewed Klaus Kinski in 1985 in Stinson Beach near Kinski's adopted American home. The nearly 45-minute segment has not been repeated since its initial broadcast in July 1985, and the series was discontinued thereafter. Whether this was due to the Kinski interview is an open question, but it is a classic of German TV history. When Kinski whispers to the young Nosbusch that it's almost sweet how stupid she is, when he talks himself into an absolute rage after being asked what freedom means to him, or when the aging actor snuggles up to his youthful interlocutor lying on a meadow, when he explains to a park ranger that he is being interviewed by German television as a great film star, or when he rambles on for minutes about philosophy, the 45 minutes of the show really do fly by. Kinski says what he thinks - regardless of whether the viewer can follow these thoughts or not. Unpredictable, charming, quick-tempered, that's how Kinski shows himself not only in this TV gem, but also in the next contribution, probably one of the most famous TV appearances of the enfant terrible.

Kinski's appearance from 18.10.1985 in the NDR Talk Show should be known to many viewers, because it has already been repeated several times. However, these broadcasts were usually limited to the barely 15-minute interview segment, in which Kinski first struggles with his hairstyle, then with host Alida Gundlach, who desperately tries to entertain answers to her questions, whereas Kinski would much rather talk about her butt. On "Kinski Talks 2", all of Kinski's contributions over the course of the show have now been edited together for the first time, increasing the running time of this talk show classic to a full 30 minutes. Especially his openness about his fees, which are the primary reason for him to accept his roles, or his statements that he is so not interested in the other participants of the talk show and in the topics discussed, or his very excited answer to why he so often plays villains, make this appearance quite a pleasure.

The actor then presents himself in a somewhat more complex way in the final highlight of the DVD, the English-language interview "Dinocittà", which was made in September 1986 in a very unusual way. For Kinski insisted on looking the documentary filmmaker interviewing him, Jay Miracle, in the eye and not into his camera. So Miracle clamped the camera under his arm and followed Kinski across the studio lot of Dino de Laurentiis. The whole thing is therefore sometimes very blurred, the sound is not always perfect, and in many a moment there is more of the sky to be seen than of Kinski's head. But his rant about the arrogance of directors, his relationship with Werner Herzog, or his explanations of why he likes living in America so much are what make this hour-long interview, which can optionally be viewed with German subtitles, so worth watching. As much as Kinski is just typical Kinski in some moments here, he also shows himself very often calm and thoughtful.

These three contributions prove why Kinski is still a real myth even many years after his death, why he still exudes such fascination and holds such a high entertainment value. Especially fascinating is the moment when Desirée Nosbusch asks him about his son. The brief moment after this question clearly shows how vulnerable Kinski was underneath his effervescent, sometimes rudely honest façade. He was a man with many faces, and on this DVD the viewer can get a very good picture of that. Absolutely worth seeing!

Picture + Sound: With 26 years old source material from the TV archives should not be assumed great technical quality. Numerous smudges and blurs are to be made out just at "time to second". Overall, however, the material presents itself in astonishingly good condition and it can be rightly claimed that here the best possible has been taken out of the source material. Moreover, it's clearly the content that counts here, and it's great!

Extras: For this DVD, six minutes of previously unreleased editing residue from "Time to Second" could be gathered together. Unfortunately, the soundtrack is missing here and so the footage was underlaid with original sounds from the actual interview. Worth seeing all the same, a nice encore.

Conclusion: "Kinski Talks 2" is a more than worthy successor to the successful first interview collection from the "Klaus Kinski Estate Edition". Estate manager Peter Geyer has unearthed real TV treasures here, which are presented in full length. Kinski unvarnished, just the way he liked it - as he himself emphasized in the NDR Talk Show! Absolutely recommendable