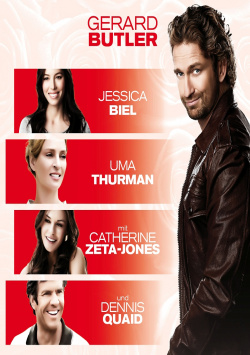 Once upon a time, George Dryer (Gerard Butler) was a big shot on the international soccer circuit. But an unfortunate accident during a match ended his career prematurely. Little remains of the glory of old days and George is faced with the ruins of his life. His marriage to Stacie (Jessica Biel) has fallen apart and he has no real bond with his son Lewis (Noah Lomax). The former professional athlete is also trying in vain to find a new job. The offer of the wealthy businessman Carl King (Dennis Quaid) to coach the football team, in which Lewis also plays, could be the perfect opportunity for George, at least the relationship with his son finally deepen and give his messed up life again a little sense. But what he didn't count on is that as the kids' coach, he also becomes extremely interesting to their mothers. And so the attempt to bring order back into his life quickly brings a lot more chaos with it.

With Kiss the Coach, director Gabriele Muccino, who previously enjoyed success with dramas such as Seven Lives or The Pursuit of Happiness, tries his hand at a loose comedy. In addition to the main actor Gerard Butler, he was able to sign up a whole squad of well-known supporting actors, especially Uma Thurman and Catherine Zeta-Jones as sexually frustrated soccer moms. But even prominent actors are of little help when there's only a weak script to work with. And that's the problem Muccino's comedy primarily struggles with. The book by James Tupper is simply too unimaginative and too much determined by clichés for the quite talented director to have been able to conjure something fresh and surprising out of it.

While the film has some very amusing moments. But they get lost in the story, which is overloaded with too many plot lines. Problematically, Muccino takes quite a bit of time to build up the individual strands of the story, only to have them more or less fizzle out. This is especially true for the character of Carl King, played by Dennis Quaid. In the first half of the film, he keeps popping up, so much so that you almost get the feeling that he's playing the second lead. Then he disappears completely, only to reappear at the end for a mini-showdown that is ultimately completely irrelevant.

It's aspects like this that make the film seem somewhat lovelessly cobbled together, and that ultimately cost it much of its thoroughly entertaining potential. Sure, Kiss the Coach isn't a bad movie; after all, as a fan of American comedies, you can laugh too often for that. But it's just too well-behaved, too trivial and towards the end just too sentimental to really leave a lasting impression. One is nicely entertained here, whereas there is always the feeling that the actors and also the director could have done a lot better. If you're just looking for a harmless mix of family and romantic comedy and can't get enough of Gerard Butler, Kiss the Coach will certainly entertain you. However, if you need more than half-baked gags, stale clichés and a hefty helping of sugar-coating, don't waste your kisses on this Coach. Only conditionally worth seeing!