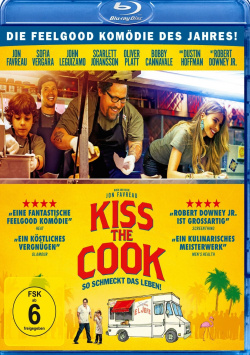 Kiss the Cook - This is what life tastes like

Movie: As the chef at Gauloises, Carl Casper (Jon Favreau) is one of the hottest chefs in Los Angeles. But this success hasn't brought Carl only happiness. His marriage to Inez (Sofia Vergara) is on the rocks, he barely has time for his 11-year-old son Percy (Emjay Anthony) and his boss Riva (Dustin Hoffman) nips any attempt at culinary creativity in the bud. No wonder Carl has little real passion left in his work, which he then has to take to the cleaners from snobbish critic Ramsy Michael (Oliver Pratt), of all people. And so it comes to pass as it must: all the pent-up frustration unloads in a direct confrontation with the critic, which makes Carl a YouTube and Twitter star, but at the same time ends his career at Gauloises. But Carl uses this low blow to make a fresh start. In Miami, he buys a rundown food truck where he plans to explore brand new culinary possibilities. Together with Percy and his sous-chef Martin (John Leguizamo), Carl embarks on a particularly tasty road trip that could reignite his old passion and also set his sights on the really important things in life in a whole new direction.

Kiss the Cook seems to be a very personal film for Jon Favreau. That's because the similarities between him and his career as a filmmaker, and Carl and his career as a chef, can be dismissed out of hand. After working on extremely expensive big-budget productions like the first two Iron Man films and Cowboys vs Aliens, for which he took a lot of critical flak, Favreau's desire was to return to simple, original filmmaking and make a true passion project. It is then this personal closeness to his main character and the passion that has been invested in lieu of a big budget that makes Kiss the Cook a feel-good film absolutely worth watching, despite a few minor lengths.

The characters are superbly cast, right down to small supporting roles. Even though some characters like Carl's former colleague and lover Molly (Scarlett Johansson) or restaurant owner Riva (Dustin Hoffman) remain rather superficial due to the brevity of their appearances and even Robert Downey Jr. doesn't offer more than an admittedly wonderful cameo, it never seems as if these characters were written into the story just to accommodate some more prominent friends of the director in the film and to fill the movie's poster with attractive names. Rather, all of the characters exude a certain charm that is also evident in the overall production.

However, Favreau not only does a great job of making his audience feel warm and fuzzy with a story that, while conventional, is genuinely beautiful. With the more than tasty pictures from the kitchen of the Gauloises and from the preparation of the Cuban barbecue sandwiches he also makes sure that the audience's mouth will water and quite a few viewers will sit on the sofa with a growling stomach. Admittedly, dramaturgically the whole thing is almost as thick as the ingredients on the Cubanos. The story doesn't really have any big surprises to offer, culminating in a somewhat too rushed and slick happy ending that really should drown in dripping kitsch. But even here Favreau managed to avoid worse with a lot of charm. Even if there were actually a lot to criticize, you just feel so comfortable in the story that you are happy to forgive even obvious weaknesses and overused clichés.

Kiss the Cook is not a big event cinema, but a small, likeable film that wants only one thing: to entertain its audience well and give a few feelings of happiness on the way. And this culinary comedy does that with flying colors. For that it gets a more than deserved: Absolutely worth seeing! But just make sure that the refrigerator is well filled before they put the film, because otherwise some scenes could really become torture!

Picture + Sound: The technical implementation of the Blu-Ray is on a very high level. The image sharpness is great and allows even small details and textures to show to their best advantage. The coloration looks very warm and natural and also the matching of black levels and contrasts support the positive overall impression of the picture quality. The same can be said for the sound. Although there is no big effects fireworks due to the genre, yet the surround channels are repeatedly claimed by atmospheric ambient sounds and minor sound effects, resulting in an overall very coherent sound carpet. Very good!

Extras: The best extra on the Blu-ray is undoubtedly the (unfortunately not subtitled) audio commentary, which director and lead actor Jon Favreau has recorded together with his producer, the chef Roy Choi. The two talk not only about various aspects of the filming, but also about how Choi created the menus in the film and oversaw and advised the preparation of the food. It's a very lively and good-humored commentary that once again makes it clear how passionate Favreau was about his work here.

In addition to the commentary, the disc has seven cut (or extended) scenes (approx. 10:02 min.) to offer, as well as seven short promo interviews with the cast. The trailer also rounds out this amuse-bouche.

Conclusion: Kiss the Cook is a tasty, likable comedy that thrives primarily on the director's passion and the many good-humored actors. Dramatically a bit thick, the whole thing is not a masterpiece, but entertaining entertainment that just makes you happy. The Blu-ray of the film is technically very well implemented, the bonus material is clear, but satisfactory. Overall, there is for it a clear: Recommendable!

Cinema trailer for the movie "Kiss the Cook - This is what life tastes like (USA 2014)"
Loading the player ...