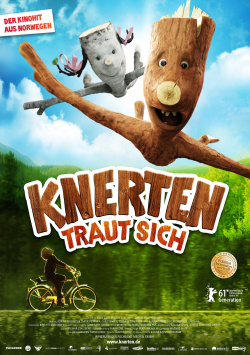 Twigson is back! After the talking stick became little Lillebror's (Adrian Grønnevik Smith) best friend in the first film, the two now have to go on a new adventure in Twigson Dare. For Lillebror's mother (Pernille Sørensen) has been hit by a car and now lies injured in hospital. Lillebror, who finds a part of a tail light at the scene of the accident, is sure that this is not a simple accident. Together with Twigson he sets out to find the truth. Too bad that his wooden friend is increasingly distracted by his new girlfriend Karoline, a stick girl of Lillebror's girlfriend Vesla (Amalie Blankholm Heggemsnes). And yet Twigson actually finds girls totally stupid...

As with My Friend Twigson, Twigson Dare is great fun for little viewers. Even if the comparisons to the popular Astrid Lindgren film adaptations are a bit exaggerated in the end, the Twigson films are on similarly endearing terrain, at least in terms of flair. Humor and the drawing of the characters, on the other hand, are rather superficial. Little Twigson fans won't mind that, but accompanying adults will roll their eyes in annoyance after twenty minutes at the latest. So this second part is also a nice children's film, but just not a great pleasure for the whole family.

The story itself is told quite excitingly, while the action is never too exciting to scare the very young target audience. Rather, young viewers will follow Lillebor's detective work with rapt attention, but are also allowed to laugh heartily every now and then. Director Martin Lund always finds just the right mixture to ensure that the children's attention is not overtaxed, but also not underchallenged. And even if Knerten traut is certainly not going to become a classic in the Astrid Lindgren style, the film is still exciting and enjoyable fun for children between the ages of 4 and 8. And the fans can be happy: the third film is also already ready and will certainly find its way to Germany!

On Saturday, 14.04.2012, KNERTEN on his cinema tour through Germany also makes a stop in Frankfurt. Between 1 and 5 p.m. he is a guest at the E-Kinos at the Hauptwache. Together with KNERTEN and his friends, children can make fun things out of things like cans, glasses, stones or wood (please bring your own!!), things that would otherwise end up in the wastepaper basket. This is called recycling crafting and is very popular right now. Of course, you can take your self-made KNERTEN souvenirs home with you.

Who does not like to tinker, just grab a few crayons and paint diligently on it - on large paper banners or simply in one of the many KNERTEN coloring books. And of course there is also the opportunity to have your picture taken with the funny KNERTEN. A day that KNERTEN fans will not soon forget - KNERTEN and his friends will make sure of that. So be there and look forward to lots of game & fun with KNERTEN and Co!